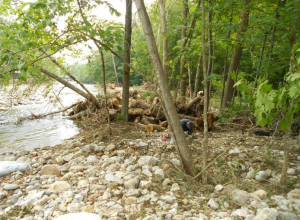 Cleanup is underway removing felled trees and rocks that floated into the campground at Camping on the Battenkill near Arlington, Vt.

Camping on the Battenkill near Arlington, Vt., has closed for the season as the result of severe flooding damage caused by Tropical Storm Irene, the Bennington Banner reported.

Lesley Nase, who owns the campground with her brother, Peter Pratt, and sister, Molly Pratt, said this is the time of the year the campground generally makes most of its money. Its closing is also a hit to surrounding businesses, which drew some income from campers spending money in the area and using the campground as a home base for their Vermont explorations.

The campground has 110 sites and normally fills to capacity this time of year, she said. Right now three-quarters of the campground is damaged to the point no camping can occur.

Situated between the Battenkill and Roaring Branch, the campground is used to some flooding, Nase said. Her parents, Larry and Mary Pratt, started the campground not long after they bought their home in 1961. She said they were told by neighbors to expect fishermen to camp on their land for the first day of trout season, and that gave them the idea to open a campground to put their kids through college.

“You can’t change Mother Nature; you can only live with her,” Nase quoted one of her late father’s sayings.

Part of living with nature meant building a berm along the Roaring Branch to mitigate the usual flooding. Nase said what happened on Aug. 28 and 29 was not usual by any means, as much of southern and central Vermont can attest. She said the berm was wiped out by the Roaring Branch’s waters. Logs, rocks, and pieces of houses that had been washed away upstream along the Kelly Stand Road in Sunderland found their way into the campground.

She said her brother’s foresight had all of the campers evacuated before the flood hit. Only one camper lost a vehicle.

Initially, getting help was daunting, Nase said. She called the 211 number the state was asking people to use and contacted the Federal Emergency Management Agency (FEMA) as well.

Nase said she found someone to come by and clear a log jam, but not much else has been done with the river. She said it hasn’t been cleaned out and there is still a risk of flooding. Volunteers have come by to help clear the property, and state Rep. Cynthia Browning, D-Arlington, who also is a Select Board member, has visited the area.

Browning said she went to the site with stream alteration engineer Fred Nicholsen, who was called out of retirement by the state Agency of Natural Resources to help handle the problems created by flooding. Browning said he recommended deepening the river, as the rocks washed down have raised the bed.

She said the berm won’t be put back, as berms aren’t advisable where there are no houses. She said the river needs access to the flood plain so the water can be slowed down. Browning said the main question now is who will pay for the river work, as FEMA is mainly focused on dwellings.

Nase said the Vermont Campground Association has been extremely helpful, with its leaders making visits to afflicted campgrounds across the state. Nase said she’d applied for a loan from the Vermont Economic Development Authority, which has offered low-interest loans to business and farms affected by Irene.

Still, it’s difficult not knowing how much aid the business can get and when it can get it, she said.