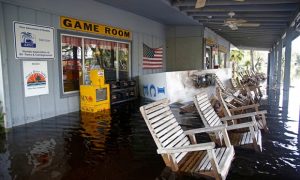 A flooded campground in Arcadia, Florida. Experts says a blow to tourism could have ‘a ripple effect’ on Florida’s economy.

Barely a month ago, Florida proudly announced a record-setting number of visitors to the Sunshine State – more than 60 million tourists coming to enjoy its theme parks, beaches and other attractions since January.

According to The Guardian, now, in the immediate aftermath of Hurricane Irma, tourism is facing a major challenge. The devastation caused by one of history’s largest storms, especially in the popular Florida Keys, is a direct strike at the $90 billion industry that fuels the state’s economic engine, with the harm caused incalculable, experts say, at least in the short term.

“Anything that happens to our tourism industry impacts the state of Florida in a huge way,” said Kevin Murphy, chair of the Rosen college of hospitality management at the University of Central Florida, speaking before the White House announced that President Trump will visit the state on Thursday (Sept. 14).

Murphy said, “It’s like a ripple effect. It’s like dropping not a pebble but a large rock in a pond with the ripples going out. That’s what it does to our economy.

“Disney, Universal, all the big parks, they’ll survive just fine,” he continued. “It’s all of the smaller tour operators, the people that make their living on taxi rides, gator boat rides, they’re really going to be hurt. Since our economy is built on small businesses, there’ll be a huge impact, the housekeepers, all those people living paycheck to paycheck. For them this is devastating.”

Rebuilding the tourist industry in the hardest-hit areas is just one of the massive challenges facing Florida as it plots its recovery from the largest storm ever to hit the state. After the immediate priorities of restoring power, water and sewers, affected cities on both coasts and along the Keys must repair washed-away beaches and damaged infrastructure, and ensure it is safe for visitors to return.

In the longer term there will be questions over strengthening construction codes for buildings to better withstand severe storms, how much insurance premiums will rise for property owners, and how property values will be affected. 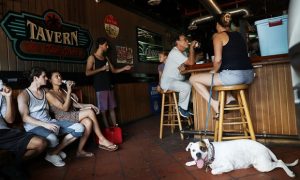 But for now the 1.4 million people employed in Florida’s hospitality and tourism industries have only one priority, getting back to work and getting their businesses open again.

On Tuesday in Treasure Island, a barrier island off of St Petersburg, the buzz of chainsaws echoed across an empty road. Homes are boarded up, but the hospitality industry is getting back to work.

Businesses here operate on notoriously slim margins. Even closing for a few days can be a huge financial burden, not only to owners but to staff.

“It’s brutal,” said Brad Piche, owner of Ricky T’s, an outdoor beach bar across from some of the largest Gulf fronted hotels. “We’re still paying payroll, but we got no money coming in. It’s expensive, you’re not only closed, but you have younger kids working here,” he said. “People who had “never been through something like this.”

One member of his staff fled to Chicago, Ill., to avoid the storm.

“We got people all over the country,” Piche said, meaning Irma was still causing problems as it harassed states people evacuated to, such as Alabama and Georgia.

“Even though I’ll be all cleaned up and ready to open, I might not have a staff,” said Piche, who estimates he would have lost $15,000 in food if the power had stayed off longer.

In one dark bar, R Bar and Grille, all the seats are taken. Nancy Patterson, the bartender, sprays soda into icy plastic cups as she hops between customers.

Has Irma affected business? “Absolutely,” she said. “It was closed for a couple days, business is business.

It could have been worse. Along with homes, businesses in the Florida Keys have been ravaged. And in Key West, which suffered some flooding but avoided the worst of the damage, tourism businesses might be ready to open, but no visitors can get there. 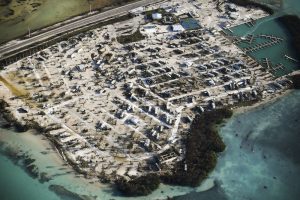 “We’re just cleaning up as best we can and waiting. There’s nobody here,” an employee in the bookshop of the Hemingway House, the island’s leading tourist attraction, told the Guardian.

Key West is a popular cruise destination from passengers from Miami, Fort Lauderdale, Tampa and other ports around the US, but will continue to lose out if restoration takes a long time, as is feared.

“What’ll happen is they’ll shift the ships from the east to the west Caribbean itinerary, and maybe Jamaica or the Yucatan pick up some of the calls that Key West would normally get,” said Andrew Coggins, a cruise industry analyst at Pace University’s Lubin school of business in New York.

“The question is how badly damaged the shops and restaurants are that generate revenue from the cruise passengers.”

The support of Visit Florida, the state’s official tourism body and trade organizations are available to business owners. The Florida Restaurant and Lodging Association (FRLA), for example, has a comprehensive list of resources available to its more than 10,000 members on its website.

But only time will tell how quickly Florida’s tourism industry bounces back.

“Those tourism dollars are absolutely huge, particularly from American visitors,” said Alan Fyall, professor of tourism and marketing at UCF.

“The scale of the industry you can’t grasp until you get here. One thing people fail to realise is that Florida’s a playground for domestic tourism. Sure there are all these international visitors, from Europe and the UK, but essentially Florida is for Americans.”

The sentiment was acknowledged by Florida governor Rick Scott even as he focused on the recovery efforts in the Florida Keys on Monday.

“This state has a strong, resilient people,” he said at a briefing. “We’re going to get our jobs back, we’re going to help build our companies again. We’ll get all this cleaned up and hopefully get more tourists back in our state.”

Announcing Trump’s visit on Thursday to Florida after Hurricane Irma, White House press secretary Sarah Sanders told reporters: “The president’s action during these times demonstrate why he’s a true leader who can bring the country together and get things done for the American people.”