Is the Camping Sector Ready for All-Electric RVs?

By: Jeff Crider|Published on: May 6, 2021|Categories: Industry News| 0 comments

Electric RVs have been talked about for a while now, but the recent movement towards all-electric vehicles has sparked even more discussion, including the creation of prototypes and other engineering designs, like this Tesla Semi motorhome concept.

Camping World Holding Inc.’s recent announcement that it plans to create a national electric vehicle (EV) service and collision network for Lordstown Motors is a major development that also paves the way for the two companies to develop the first, all-electric, high-volume production RV.

“The future is now and the realization of electrifying RVs and the outdoor community is within our grasp and will only grow from here,” Camping World Chairman and CEO Marcus Lemonis said in a joint press conference in December with Lordstown Motors CEO Steve Burns.

In the meantime, by leveraging Camping World’s growing footprint of over 170 service and collision centers across the U.S., Lordstown Motors’ customers are expected to enjoy one of the most comprehensive RV support systems ever designed. Camping World technicians are undergoing extensive training with the goal of being able to service the Lordstown Endurance, the world’s first full-size, all-electric pickup truck, by summer.

Other innovations involving Camping World and Lordstown are expected to be announced in the coming months. But how prepared is the campground industry to handle electric vehicles? And how many electric vehicles is the industry seeing right now?

“I’m skeptical about seeing cross-country electric vehicle usage,” he said. “I just don’t think the battery technology is there yet.”

The limited range of electric vehicles has long prevented people from using them on long-distance drives, simply because of the inconvenience of having to stop frequently to recharge the vehicle.

“That’s going to be a problem for RV parks,” he said. “They’re going to come in with an electric vehicle as a tow behind and they will plug it into the pedestal at the campsite and charge it overnight. Unless you are metering that site, you will have a big increase in the use of electricity.”

Elliott said it typically costs about $100 to meter the electricity at a campsite. Park operators will need to monitor their guests’ electrical consumption to determine the extent to which they should meter their campsites.

Mike Gurevich, who co-owns and operates the 400-site Cherry Hill Park in College Park, Md., said he sees RVers towing electric vehicles and charging them at his campsites. But he said there are just a few RVers doing this and the costs of charging vehicles is not yet making a significant impact on his overall electricity costs.

“Our overnight rates are based on two or three air-conditioners per unit running in July,” he said, adding, “I am thinking that cars won’t be dramatically worse than that, at least for now.”

Gurevich said the merits of metering to ensure guests pay for charging electric vehicles may depend on the cost of electricity locally since electricity costs vary by the utility company.

Gene Zanger, who co-owns and operates Casa de Fruta RV Park in Hollister, Calif., said he simply charges guests $5 to charge their electric vehicles on one of his 50-amp RV sites. Casa de Fruta is a diversified business that includes a fruit store, a restaurant and a 300-site RV park.

Zanger said he sees a fair number of guests in Teslas who stop at his restaurant for lunch or dinner while charging their vehicles at a Chevron station next door that was equipped with 20 superchargers about two and a half years ago. But his park is also just 70 miles away from Tesla’s headquarters near Silicon Valley.

Having a Tesla charging station next door has been good for his business, Zanger said, adding that the vehicles tell the driver at the beginning of their trip where they can stop and how long they will need to charge so they can plan their day. 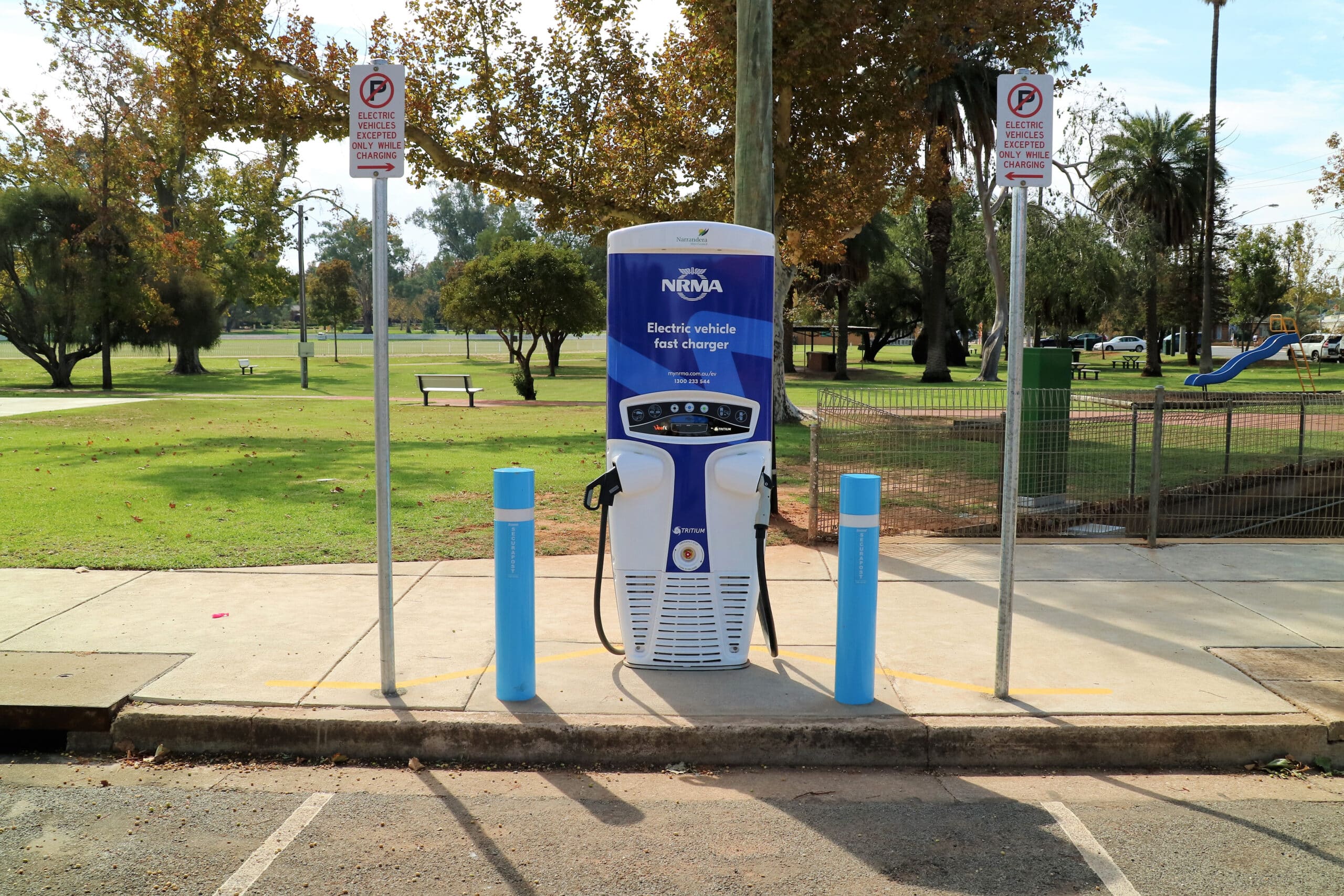 Installing an EV charger is something park owners may look to do in the future.

A more immediate question for private park operators now, Zanger said, is trying to figure out the economics of installing electric vehicle charging stations and whether it makes sense financially to do it.

“You’ll see hotels that have charging facilities. It’s an amenity, but we’re trying to figure out if we can put in our own charging facility with a 100-amp electrical outlet with the proper receptacles for RV charging,” he explained. “Some companies will come in and put in the stations and pay a portion of it to put it in, but nothing more.”

Zanger said he would like to have EV chargers in front of his restaurant, but have the EV charging company pay some kind of rent for using the space. So far, he hasn’t been able to find any company willing to pay for this kind of arrangement.

Tesla itself installs its own charging stations.