AccuWeather.com reports communities from Lake Charles, La., to Mobile, Ala., are on alert for a landfall from future Category 2 Hurricane Isaac late Tuesday.

Residents, including those in New Orleans, La., and Gulfport, Miss., should be making preparations for Isaac’s arrival, AccuWeather.com reported.

Ironically, Isaac is expected to threaten lives and property along the northern Gulf Coast seven years to the date of Hurricane Katrina’s devastating landfall.

Even those living and vacationing westward to Houston, Texas, should monitor Isaac’s progress. Isaac tracking more toward the northwestern Gulf of Mexico cannot be ruled out and all depends on whether Isaac interacts with a cold front pushing toward the Northeast.

A larger version of the latest forecast track map for Isaac (with times in EDT) can be found on the AccuWeather Hurricane Center.

While currently a tropical storm, Isaac is a storm that should not be taken lightly.

As the AccuWeather.com Hurricane Center has been calling for since last Thursday, Isaac is expected to slam into the northern Gulf Coast around Tuesday night as a Category 2 hurricane (with maximum sustained winds between 96 and 110 mph).

There is a concern that if Isaac tracks more westward toward New Orleans, La. — essentially spending more time over water — the storm could become a major hurricane (Category 3 or higher) prior to landfall.

Whether a powerful Category 2 or 3 hurricane, Isaac will pound those in its path with destructive winds, widespread flooding rain and isolated tornadoes.

Conditions only worsen in a Category 3 hurricane. Most trees will not be able to withstand the strength of these winds, which threaten to cause more substantial structural roof damage on well-built homes. 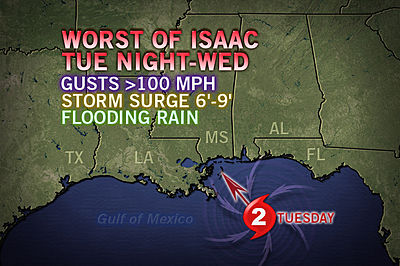 The worst of Isaac expected Tuesday night and Wednesday.

In both cases, loose lawn items will easily become flying and potentially deadly or damaging projectiles.

A significant storm surge between 6 and 12 feet would also evolve near and east of Isaac’s landfall point, leading to coastal flooding and beach erosion.

A track onto the Mississippi coast would spell severe trouble for both New Orleans and Mobile in terms of storm surge. Winds circulating around Isaac would funnel water from the Gulf of Mexico directly into Mobile, via Mobile Bay.

Even though New Orleans will lie west of Isaac’s path given this scenario, such a track could still cause water from Lake Pontchartrain to put severe stress on the city’s levee system.

Winds will initially drive water from the Gulf into Lake Pontchartrain as Isaac approaches, then will push that water back toward New Orleans as the storm tracks north of the city.

Those at risk of taking a direct hit by Isaac should closely monitor the progress of the storm and heed all evacuation orders.

Officials may be forced to evacuate more oil rigs across the north-central Gulf of Mexico. Current indications point toward waves of 20 to 30 feet (or higher) building in this region of the Gulf as Isaac gains strength and approaches the coast.

The dangers of Isaac will not end when the storm makes its final landfall. Flooding rain and isolated tornadoes will continue to accompany Isaac inland through the South.