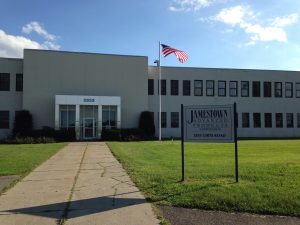 Ask many of the employees of Jamestown Advanced Products Corp. in Jamestown, N.Y., why the business has made it to celebrate 30 years, and they will give the same response: The ownership team.

Owned by Wendi and Lee Lodestro, Jamestown Advanced Products is a New York State-Certified Woman-Owned Small Business specializing in sheet metal fabrication, according to an announcement from the company. 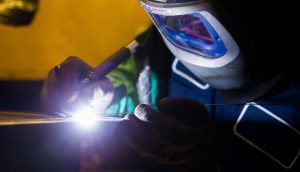 The company was started in 1987 by Jon Wehrenberg, Wendi Lodestro’s father, to fulfill metal fabrication needs. He began the business with one customer from Erie, Pa. In 1989, Wendi Lodestro joined Wehrenberg, signing on as the company’s general manager. Two years later, Lee Lodestro also joined Jamestown Advanced as the engineering manager.

A few short years later, Wehrenberg and his wife were camping when he saw the potential for Jamestown Advanced Products to grow by offering campground equipment. In 1994, the company began a campground line with a single charcoal grill and campfire ring.

When it came time for Wehrenberg to retire, the Lodestros had to make a tough decision.

“My father gave us a couple of options that Lee and I weighed,” Wendi Lodestro said. Wehrenberg offered to sell Jamestown Advanced outright and give a portion of the sale to the Lodestros to begin their own business venture, or to sell the entire existing company to the pair.

“It was a very difficult and life-changing decision,” Wendi Lodestro said. “Our son, Josh, to this day states the reason he is very business-savvy is due to every night sitting at the dining table and discussing business.”

The Lodestros made their decision, and purchased the company in December 1999. At the time, Jamestown Advanced had around 40 employees. Today it has more than 100, and sales have tripled, the company reported.

The changes the company has undergone in its 30-year history go beyond the numbers. Chris Roll, current project manager, was one of the business’ first six employees when it began.

Reminiscing on his career with Jamestown Advanced, Roll remembers two previous venues the business operated out of before settling at its current location. Additionally, Roll said the business has grown from starting with fabrication to adding powder coating and assembly lines.

“We have tried to become a one-stop shop for our customers,” Roll said. “If they need something fabricated, we try to provide it. Pick up the phone, and we’ll build it.”

Dennis Button, who has worked for Jamestown Advanced Products since 2002, and Bonnie Ring, who has been with the company since 1997, also pointed out the growth in new products coming through the factory over the years, as well as additions of new equipment.

Wayne Carroll, who began working for Jamestown Advanced as a welder in 1994, said there has been an extreme increase in the amount of products moving through the factory as the company continues to grow. 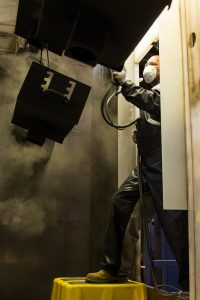 Engineering Manager Jeff Green has been with Jamestown Advanced since 2010, when he began working on the paint line in the factory as a summer job. His choice to stay, though, boils down to ownership.

“I decided to come back after college because of the appreciation and recognition that the owners have shown me over the years for all of the hard work I’ve done,” Green said.

Green is not the only one with this sentiment. Ray McKotch, purchasing manager, began working at the company in 2002 as a turret operator in the factory, before moving to sales and then into his current position.

“Wendi and Lee are very generous, caring people,” McKotch said. “They gave me a job when I needed one, and when it wasn’t the right fit for me, they offered me the sales position. They care about their employees, providing opportunities for them to grow, expand and succeed with the company. It’s a family business, and they make you feel like you’re part of the family.”

The feeling, though, is mutual.

“Our employees have been instrumental in Jamestown Advanced success,” Wendi Lodestro said. “Not one day goes by that I do not appreciate each and every one of them.”

Looking to the next 30 years, Wendi Lodestro said she is looking forward to Jamestown Advanced Products’ continued growth and success.

“That would be a great legacy for my parents, as well as Lee and I,” she said.

Her employees are on board.

“Tell me where we’re going in the future, and I’ll go,” Roll said.

Additional information about Jamestown Advanced Products can be found at www.JamestownAdvanced.com.