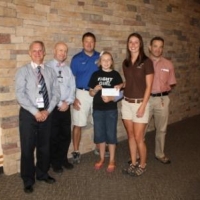 Kaylee Kouw (black shirt) is flanked by Rick Walker and Darcie Lowe from the Jellystone Park at Lake Monroe which made a donation to the IU Health Proton Therapy Center. Also present are Drs. Douglas, McMullen and Buchsbaum.

Yogi Bear’s Jellystone Park at Lake Monroe near Bloomington, Ind., raised over $1,000 over the Memorial Day Weekend to be donated to the Indiana University Health Proton Therapy Center for cancer treatment.

Over 100 families participated in the Yogi Bear Memorial Day Auction by placing bids on various items that were donated by area businesses. Participants purchased raffle tickets in exchange for the opportunity to win. This is the second year that the Indiana Jellystone park has hosted an auction benefitting the IU Health Proton Therapy Center, according to a news release.

“We went around the campground and sold the tickets to the campers with Yogi Bear,” said Darcie D. Lowe, assistant general manager at Jellystone Park at Lake Monroe. “It’s a fun thing at the park to get everyone together for a good cause.”

Some of the prizes included rounds of golf at Eagle Pointe Resort, four tickets for the Bloomington Speedway, a maintenance kit for an RV, a flat-screen television and many more. Winners were chosen at random.

All proceeds from the auction will be used to support the needs of pediatric patients undergoing treatment at the Bloomington center.

“We definitely plan on raising money and supporting the Proton Therapy Center for years to come,” said Lowe.

IU Health Proton Therapy Center is one of 10 centers in the United States that offers proton radiation therapy. The treatment staff consists of board certified radiation oncologists, licensed nurses, licensed radiation therapists – who specialize in pediatric and adult treatments – and a credentialed medical physics staff. The IU Health Proton Therapy Center pediatric program is affiliated with Riley Hospital for Children at Indiana University Health, which was ranked among the top children’s hospitals in the nation in U.S. News & World Report’s 2012-13 edition of America’s Best Children’s Hospitals.