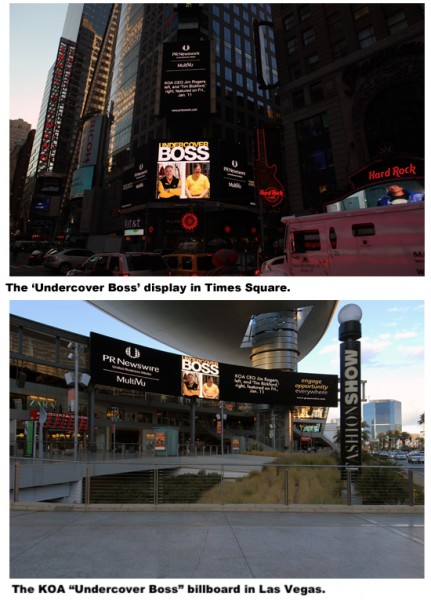 The billboards are part of the promotional effort for the upcoming KOA episode of “Undercover Boss,” which airs on CBS channels across the country on Jan. 11, according to a news release.

“We are pulling out all of the stops to ensure North Americans get to see what camping – and KOA camping in particular – has to offer,” Rogers said of his “Undercover Boss” experience.

In the episode, which airs Friday (Jan. 11) at 8 p.m. Eastern and Pacific, 7 p.m. Central and Mountain, Rogers goes undercover to work with owners and staff at four different KOA campgrounds.

“We’re thrilled that we were asked to participate,” Rogers said. “It was a once-in-a-lifetime experience for me, personally, and I think it will expose what camping is today to an entirely new segment of television viewers.”

KOA is the world’s largest system of family-friendly campgrounds, with 489 locations in the U.S. and Canada.

Each week, the Emmy Award-winning “Undercover Boss,” which is in its fourth season, follows a different executive as they leave the comfort of their corner office for an undercover mission to examine the inner workings of their companies. While working alongside their employees, they see the effects their decisions have on others, where the problems lie within their organizations and get an up-close look at both the good and the bad while discovering and rewarding the unsung heroes who make their companies run.

For more information on the Kampgrounds of America/Jim Rogers episode of CBS “Undercover Boss” go to KOA.com or http://www.cbs.com/shows/undercover_boss/.