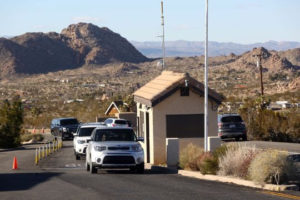 The shuttered ticket booth at Joshua Tree National Park on Friday (Dec. 28). Visitors continue to enter the park despite it being unstaffed due to the government shutdown.

The Berry family rolled into California’s Joshua Tree National Park on Tuesday (Jan. 1) night after spending 13 hours on the road, and barely eight hours passed before they learned their week long camping trip had already come to an end, according to The Desert Sun.

The northern California family had until noon Wednesday to vacate the park’s Hidden Valley campground after all camping sites were closed due to the partial federal government shutdown. It was the latest step in securing Joshua Tree since Dec. 22, when the shutdown began and staff was sent home. A skeleton crew of rangers then began working with volunteers to maintain a park that was still attracting visitors.

Campers accustomed to a nomadic lifestyle said they were prepared to weather the storm and find new places to stay just a few days sooner than they had expected. But for those like the Berrys, the closure did nothing but ruin long-anticipated vacations.

As the noon hour approached, Jim Berry and his wife somberly packed their van while their daughter and her boyfriend took down their tent just a few yards away. Where they would go after leaving Joshua Tree remained a mystery.

“We have a particularly challenging situation,” said Jim Berry, 71. “We’ve been planning this trip for months.”

A park ranger patrolled the area to make sure campers were leaving and she referred questions from The Desert Sun to a park spokesman who is on furlough and hasn’t been available since the government shutdown began.

Campers defended park rangers and said that, despite being exhausted, they remained cordial with visitors and have done a good job of keeping the park in shape.

“You could tell they felt bad about making us leave. We know this isn’t their fault,” said Portland resident Darren Lewis, 21.

Road signs were in place to prevent people from entering campgrounds, but campers were still allowed to park elsewhere and explore the rest of the park during the day.

Nonetheless, a steady stream of motorhomes flowed out of the park Wednesday morning, along with cars packed with what appeared to be camping supplies. Heading in the opposite direction — into the park — was a larger number of vehicles carrying what appeared to be day visitors.