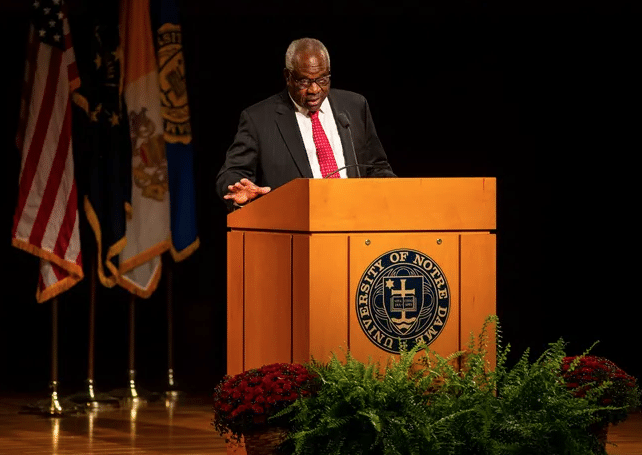 At one point near the end of a talk at the University of Notre Dame on Thursday, Supreme Court Justice Clarence Thomas described the joy he’s found in “motorhoming” across America for the last 22 years, parking his RV at campsites, Pilot stations and Flying J’s across the country, according to reporting by Carley Lanich in the South Bend Tribune.

“We sense amidst the noise telling us that truth does not exist, that there is something true, something transcendent, something solid, something that pulls us together rather than divides us,” Thomas said. “My wife and I this summer were inspired when we saw in the RV parks the people who still hold these values.”

He began his remarks by showing frustration with an increasingly divided America and lamented what he called a “race-obsessed world.”

The second Black justice on the Supreme Court made a rare public appearance at the university, following a year of social unrest, racial tension and politicization of classroom teachings. During the talk, he compared experiences in his youth to current events.

“Every time I walked into a room, I had to look for something in common, and that’s the way we grew up,” Thomas said to a full auditorium at the DeBartolo Performing Arts Center. “Now look at us. We just seem like we keep dividing, subdividing into subcategories, sub-sub-categories of differences and emphasizing those differences.”

Thomas, the longest-sitting member of the Supreme Court, spoke at the invitation of Notre Dame’s new Center for Citizenship & Constitutional Government.

He also spent time this week with students on campus, co-teaching a one-credit undergraduate course with the center’s founding director, Vincent Phillip Muñoz.

Thomas, who admitted to being “quite content not to get out on the road,” said he was first invited to campus by Maggie Garnett, a student whose mother clerked for the justice. He was further intrigued by the offer from Muñoz to discuss the Declaration of Independence.

Thomas spoke of his upbringing — raised by his grandparents in a Catholic home in the deep South, where “there was a deep and abiding love for our country.”

Thomas, who has consistently opposed affirmative action policies, called the segregation and race-based laws he was born into “repulsive” and “at odds with the principles of our country.” But he also called the activism he experienced in the late 1960s “cynical” and “jaundiced.”

He instead encouraged the audience to look to the ideals of equality outlined in the Declaration of Independence and the Constitution, which Thomas said hold a promise Americans have struggled, but not failed, to uphold.