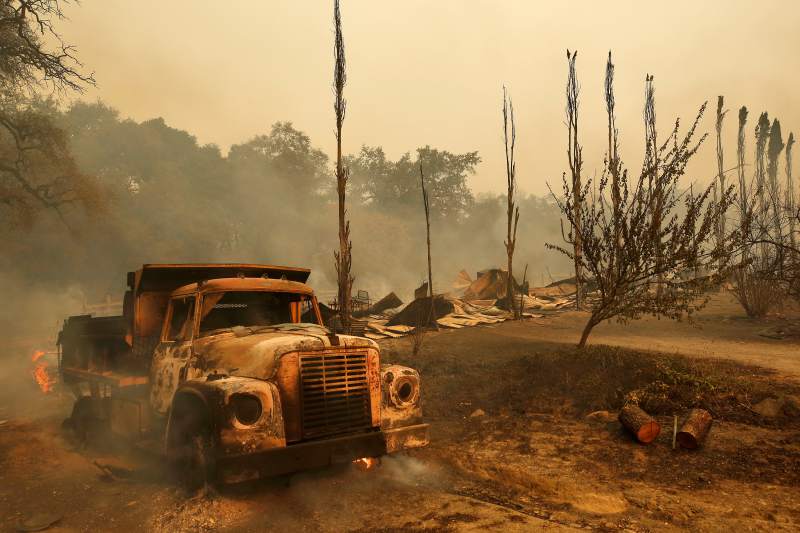 The aftermath of the Kincade Fire on Milk Barn Road in Windsor, Calif., on Sunday (Oct. 27).

The Kincade fire burned into history Wednesday (Oct. 30), becoming Sonoma County, Calif.’s largest wildfire by scorching an area three times the size of Santa Rosa as a force of more than 5,000 firefighters gained a grip on the week-old conflagration, according to The Press Democrat.

Wednesday night’s winds were weaker than expected, and fire crews expanded the protective lines between the flames and populated areas, a feat that did not occur with the calamitous fires in the fall of 2017.

“I would say there’s a lot of optimism that we have turned the corner for the better on this fire,” Cal Fire Division Chief Jonathan Cox said at the fire agency’s Wednesday night press conference.

The fire, which erupted with a fury during a potent windstorm Oct. 23 in the Mayacamas Mountains east of Geyserville, grew by only 700 acres Tuesday night — a difference Cal Fire attributed to improved mapping — and got no larger Wednesday, finishing the day at 76,825 acres, or 120 square miles.

Containment jumped to 45% Wednesday, up from 15% the day before. The Kincade fire has now destroyed 266 structures, including 133 homes, an increase Cox attributed to a more accurate damage assessment by Cal Fire teams. Four first responders have been injured battling the blaze.