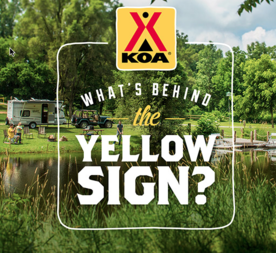 Kampgrounds of America’s (KOA’s) innovative “What’s Behind The Yellow Sign?” advertising and marketing campaign was recently awarded a Silver Medallion by the 2015 Advertising & Marketing Effectiveness (AME) Awards.
KOA’s campaign won the Silver Award in the Sports and Leisure category.
The annual AME Awards were created in 1994 to provide an international forum to honor work that demonstrates groundbreaking, effective solutions to challenging marketing problems.
According to the AME awards, “Winning campaigns such as KOA’s receive the award for addressing a challenge in the marketplace, utilize outstanding creative elements, and incorporate a thorough marketing plan to deliver a successful execution.”
KOA’s campaign was designed and executed by its digital agency, LRXD of Denver, Colo., as well as KOA’s own marketing department professionals. You can view elements of the successful campaign at www.behindtheyellowsign.com.
The “What’s Behind The Yellow Sign?” campaign aired last summer on both Country Music Television in Canada and Great American Country (GAC) in the U.S. It also included a comprehensive digital advertising campaign that helped bring the message to new audiences.
“Our ‘What’s Behind The Yellow Sign?’ campaign was a strategic effort to reintroduce KOA camping to North Americans,” said KOA Senior Vice President of Marketing Toby O’Rourke. “Many in Canada and the U.S. have had experiences at KOAs in the past, but we knew they were likely unfamiliar with the substantial changes and improvements that have been added in recent years. This was a way to encourage campers to give KOA another look. The campaign has been effective and helped us dramatically increase both revenues and camper nights.”
KOA’s “What’s Behind The Yellow Sign?” campaign will continue in 2015 with a new, broadened phase that includes placement on more cable television networks as well as expanded digital advertising.
The AME Awards are selected by a committee comprising multidisciplinary marketers, media planners, strategy directors, social media experts and creative directors from throughout the world.
KOA , with 485 locations in North America, is celebrating its 53rd Anniversary in 2015. For more information, go to www.KOA.com.