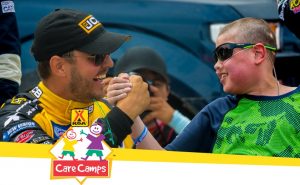 Global Rallycross (GRC) driver Steve Arpin, continuing a career-long commitment to children, has signed on as an official ambassador for Billings, Mont.-based Kampgrounds of America (KOA) Care Camps and will race in Seattle on Sunday, Sept. 10 in his car featuring Care Camps colors.

Arpin, enjoying his best GRC season with two wins and seven podiums in nine races, is excited to partner with Care Camps to raise awareness and help send more kids with cancer to specialized oncology camps.

“Care Camps is a great organization full of people with big hearts,” Arpin said. “I’m delighted to work more closely with them to help children with cancer benefit from the healing power of the outdoors.”

Arpin, who is also general manager of Loenbro Motorsports, and Loenbro founders Paul and Jon Leach are excited to unveil a new look for the race. Their Ford Fiesta #00 Supercar will be wrapped with the fun and colorful Care Camps logo and graphics.

Black Eagle, Mont.-based Loenbro is a single-source solution for companies needing construction, electrical, industrial, mechanical and inspection work. Loenbro has operations in 20 states and experience in several industry sectors, including energy and manufacturing.

Wade Elliott, chairman of Care Camps, is proud to be associated with Loenbro Motorsports and its commitment to the organization. 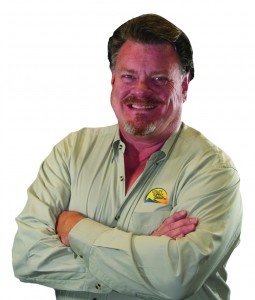 “We are very thankful to Steve, Paul and Jon for their support for these sick kids and their families,” Elliott said. “Seeing Steve behind the wheel of a Care Camps race car on Sunday will be very exciting, and we are thrilled with their generous support.”

Over more than 33 years, Care Camps has raised $12 million to send young patients to oncology camps across the U.S. and Canada. Currently, Care Camps supports 129 camps with more kids than ever attending.  However, there is a shortfall in the funding needed to operate these camps, and Care Camps is working hard to close the gap.

Throughout his racing career, Arpin has brightened the day of many a child undergoing treatments for cancer or other illnesses. He often visits hospitals to talk with young racing fans, pose for photos, sign autographs and lift their spirits.

Families, caregivers, charities and research groups across the U.S. observe September as Childhood Cancer Awareness Month. In the U.S., 15,780 children under the age of 21 are diagnosed with cancer every year; approximately 25% of them will not survive the disease.

For more on the GRC Seattle weekend, visit RedBullGRC.com.