By: Woodall's Campground Management|Published on: May 3, 2017|Categories: Industry News| 0 comments 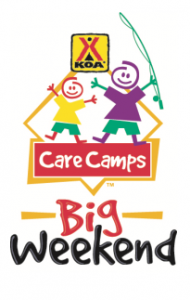 With just over a week to go until the 2017 edition of the KOA Care Camps Big Weekend event May 12-13, advanced reservation numbers are reaching record levels, according to Kampgrounds of America Inc. (KOA), one of the charity’s biggest sponsors.

KOA Care Camps Big Weekend provides a night of camping at participating KOAs for $10 on May 13 for campers who stayed as paying guests May 12. The entire $10 Saturday fee is given to the KOA Care Camps Trust, which provides direct support for roughly 130 summer camp programs that serve children with cancer located throughout North America.

As of May 1, nearly 18,000 online reservations had been booked for the event. That nearly matches the May 1 advanced reservation record set in 2010 for the weekend event, and is up more than 13% from reservations made at this stage for the Big Weekend event in 2016.

“We consider this event as the start of the summer camping season at KOA, and it encourages campers to break out their RV and tents a little earlier than they planned for the summer season,” said Toby O’Rourke, KOA’s chief franchise operating officer. “Over the years since we started this event in 2004, our KOA owners and their staffs have raised millions of dollars that go directly to sending children battling cancer, and their siblings, to one of this special summer camps. We are so happy to give our campers a way to help while they have fun at their favorite KOA campground.”

KOA Care Camps was founded by KOA franchisees and is heavily supported by them and Billings, Mont.-based KOA, in addition to a variety of companies and individuals in the outdoor-hospitality sector. For more information on KOA Care Camps or to make a direct donation, to to www.koacarecamps.org.