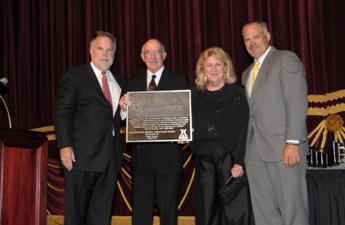 Don Lowe, CEO of Franchise Services Inc. and a former executive with Kampgrounds of America Inc. (KOA), was honored recently with the Darrell Booth Lifetime Achievement Award by KOA.

Both Franchise Services Inc. of Mission Viejo, Calif., and Kampgrounds of America Inc. of Billings, Mont., are owned by KOA Holdings Inc., according to a news release.

The award, named after Darrell Booth, the first KOA president, was presented during Franchise Services Inc.’s recent national convention in Baltimore. Lowe currently heads a franchise management company that includes Sir Speedy, PIP Printing and TeamLogic IT. Sir Speedy and PIP are the largest printing and marketing services franchises in the world.

Raised in rural Kentucky, Lowe learned that fairness and integrity were prized values that could shape an organization. Lowe first joined the KOA Holdings family in 1972 as KOA’s national merchandising director. His KOA career included many promotions, and he was the senior vice president of KOA prior to his Sir Speedy assignment. Lowe’s franchise expertise was considered exceptional, and he demonstrated his natural leadership through a philosophy of fairness and respect to build relationships with franchisees.

When KOA was looking to acquire another franchise company, they learned of Sir Speedy, a struggling printing franchise that was in bankruptcy. KOA purchased Sir Speedy in 1978 and selected Lowe to lead the revival of the new sister company.

Under his direction, the Sir Speedy franchising model and its business practices changed dramatically — beginning with the franchisor/franchisee relationship. That solid relationship allowed Sir Speedy to lead its network through many changes, including offering consumers the newest technology offerings of color, faxing, desktop publishing, digital printing, print-on-demand, online ordering and document management.

During his career, Lowe has helped over 1,500 people fulfill their desire to own their own business, control their own destiny and provide for their families. Lowe’s son, Richard Lowe, is now president and chief operating officer of Franchise Services Inc.

The Darrell Booth Lifetime Achievement Award is presented to deserving individuals whose values and achievements mirror those of Booth, who laid the foundation for Kampgrounds of America Inc. to become the world’s largest and most successful system of family-oriented campgrounds. The first recipient of the award was Richard A. Cutler, a founding partner in the Cutler and Donahoe Law Firm in Sioux Falls, S.D., and also president of the Recreation Adventures Company, which owns and operates 10 KOA campgrounds in the U.S.

Kampgrounds of America is celebrating its 50th Anniversary in 2012. KOA was born on the banks of the Yellowstone River in Billings in 1962.