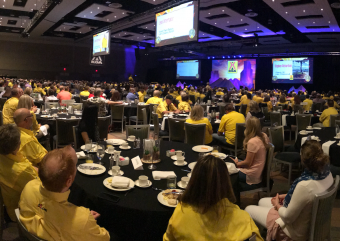 With 90% of its 500 parks posting gains in 2017, life is good right now for Kampgrounds of America Inc. (KOA), America’s largest network of private campgrounds.

O’Rourke, in her detailed lead-off presentation, said the general business climate is right today for continued growth while an ongoing surge in consumer interest in camping is drawing a wave of new prospects – tenters, RVers and those interested in alternative accommodations like park model RVs, yurts, teepees and tree houses – to the registration desks of public and private parks throughout the U.S. and Canada.

“There are legions of new campers coming into camping,” said O’Rourke, adding that all of the apparent trends when she first joined KOA seven years ago are coming to fruition. “There’s a resurgence of excitement about the outdoors. There are more families, more ethnicity and younger generations. We talk a lot about the Millennials. You all know Millennials are the largest segment of the population, right? But did you also know that Millennials are now the largest segment of the camping population? That’s a fact.

“On the other side, retirement is off the charts,” she continued. “Baby Boomers, the core of our business, are retiring in droves – 10,000 per day. And that’s a trend that’s going to continue for the next 12 years. All that’s driving RV sales. RV shipments are at their highest levels in 40 years, having doubled since 2008. And we’re all feeling capacity restraints. There’s a lot of talk about the need for more sites, more campgrounds, and a lot of talk in Washington about modernizing our public parks, our national parks.” 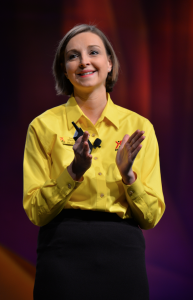 O’Rourke said there are an array of current trends that 75-employee KOA is monitoring closely, including the fact that so many people are taking fewer and shorter vacations these days. At the same time, would-be campers seem to be valuing unique experiences, all of which, she suggested, should play into KOA’s hands.

As part and parcel of a continuing trend toward “glamping,” O’Rourke said a growing number of new age, Airbnb-style outfits like Tentr, which markets “hassle-free” overnights on privately owned land, and Hipcamp, which advertises its ability “to book over 285,000 campsites, ranches, vineyards, farms, public parks and more,” are making considerable headway.

“And did you know that you can now rent an RV and rent it out to people when you’re not using it?” asked O’Rourke. “That’s going to impact us in a big way in coming years.”

That comment, in fact, preceded a rather unique announcement surfacing later in KOA’s morning presentation that the privately held franchisor has agreed to team up with Outdoorsy, a two-year-old player in the innovative peer-to-peer rental business. The business model represents a growing new arena that involves private RV owners renting out their units when they’re not in use to other individuals through the networking of companies like Outdoorsy, Jucy, RVShare and others.

The idea, according to a release, is to enhance campers’ access to both RVs and quality campgrounds by co-marketing KOA’s parks along with the 10,000 RV owners with which Outdoorsy is connected. 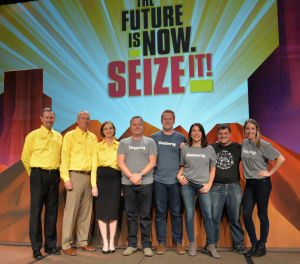 “Our goal is to make the outdoors as accessible as possible through a simple tech-enabled marketplace,” said Jen Young, CMO and co-founder of Outdoorsy, in a press release. “This partnership allows us to give full-time RVers the ability to experience the best of North America through premium campgrounds that offer a wealth of amenities and activities.”

“Working with Outdoorsy provides KOA with the opportunity to welcome a new generation of tech-savvy travelers who are looking to experience the outdoors in an easy frictionless way,” added KOA Vice President of Brand Development Lorne Armer.

To learn more about Outdoorsy head to outdoorsy.com.

Meanwhile, CFO Burke reminded the audience about the significance of RV owners in KOA’s daily business and the fact that 85% of its camper nights and 74% of its registration revenues are linked to RVs and the resurgent RV industry. And he introduced a video from Thor Industries Inc. President and CEO Bob Martin to underscore the RV sector’s mutual regard for KOA, which serves about 1.1 million campers a year, a majority of them tenters.

Hittmeier, for his part, said the KOA brand has never been stronger. “And that’s no small feat,” he added, considering it was “fairly static and wasn’t going anywhere” only a few years ago. “And we’re reinvigorated that brand through our marketing and through all of the investments you’ve made at your campgrounds – and by completely changing our outlook on guest services and outdoor hospitality.”