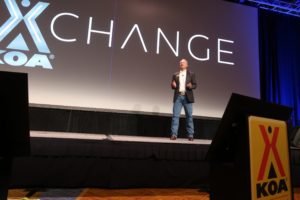 Pat Hittmeier speaks during the Kampgrounds of America Inc. 2018 Convention in Fort Worth, Texas

The news has been good for Kampgrounds of America Inc. (KOA) in 2018. That is the message KOA officials are spreading at their 2018 convention being held this week in Fort Worth, Texas.

KOA CEO Pat Hittmeier told attendees that guest satisfaction is up, with 97% of the system’s campgrounds scoring 40%. He also noted that KOA is set to spend more than $10 million on marketing in 2019, a 74% increase from five years ago, due to an uptick in attracting new campers.

He told the more than 500 attendees at the convention, most of whom own or operate a KOA park, that due to all of the upgrades, marketing and service improvements, owners have realized a 46% increase in check-ins over the past 5 years.

“This year we’re projected to do for the first time ever more than 1 million KOA.com reservations,” Hittmeier explained. “Reservations that put $153 million into your bank account, and reservations that resulted in 2.3 million camper nights, up 183% from just five years ago.”

Toby O’Rourke, president of KOA, told attendees that the company is poised to continue to see growth in the future, comparing the company to a “blue chip” stock.

“For the first time this year, the government reported on the outdoor recreation industry’s contribution to the country’s gross domestic product,” she explained. “And that came in at 2.2%. That is higher than mining and other sectors such as chemical products manufacturing. Now, there’s a lot of things that come into this number, like boating for example, which is the largest, but RVs were $30 billion of this number. And that’s expected to grow. They expect on a global level that the RV industry is going to be contributing $56 billion by 2024. So we’re seeing something really great.

“But beyond the outdoors, we sell camping,” O’Rourke continued. “There’s a resurgence of interest in camping and it’s becoming part of the North American lifestyle. Thirty-nine million households camp every year. That’s a 20% increase since 2014 and when you ask these campers, 40% plan to camp more this year than they did last year. Not only are they camping every year, they’re camping more frequently. We’ve seen a 64% increase in people that are camping three times a year, and we’ve seen 6 million new households come into camping since 2014.”

She also noted that KOA is on solid financial footing with 80% of KOA parks reporting an increase in revenue year-over year.

“Systemwide we’re up 2% in camper nights and almost 6% in registrations,” O’Rourke said.

She explained that there have also been a lot of new investments in KOA.

“This year we brought in 12 new conversions, four more are about to be signed and that means we should have 515 KOAs in the 2019 directory,” O’Rourke noted to attendees. “Multiproperty ownership is rising. That’s real proof of doubling down on your investment. Twenty-seven owners now represent 83 parks and that number is actually growing as we speak, and that doesn’t count the company-owned portfolio. Here’s the exciting one, four new construction contracts signed this year. That adds to nine others that also have franchise agreements, so that’s 13 new KOA’s being built across the U.S. and Canada. People are investing in camping and they’re investing specifically in KOA.”