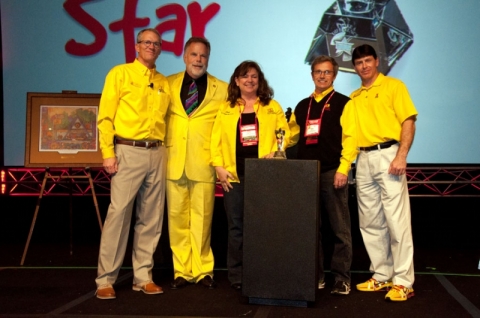 The campground, owned and operated by Cheryl and Mark Manning, has been in the KOA system for the past five years. The award is giving to relatively new KOA owner who has demonstrated all of the best qualities of a successful KOA franchise owner, including business planning, investment in their campground, superior customer service results and a desire to participate actively in the KOA system.

“In a very short time, the Mannings have made the Fancy Gap/Blue Ridge Parkway KOA one of our best,” said KOA Vice President for Franchisee Services Jef Sutherland. “They have added so many activities and features to their campground that it’s almost impossible to list them all. Suffice to say that their campers have noticed, and the steady growth of their business attests to the fact that they are doing everything right.”

The campground sits along the scenic Blue Ridge Parkway, and is just 14 miles from Mount Airy, North Carolina – the hometown of the late Andy Griffith and the inspiration for the fictional town of Mayberry.

“Our philosophy is to try to make all of our campers Happy Campers,” said owner Cheryl Manning.