By: Woodall's Campground Management|Published on: May 3, 2018|Categories: Industry News| 0 comments 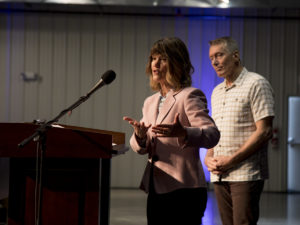 While Recreation Vehicle Industry Association (RVIA) President Frank Hugelmeyer announced a concept project called the “Campground of the Future,” Rick May, recently named as the Senior National Advisor for Recreation to U.S. Interior Sec. Ryan Zinke, bemoaned the antiquated campgrounds of the U.S. National Parks Service – the most recent of which, he noted, was built in 1966.

During his keynote presentation, May, who was introduced by Zinke in a video recording, took the opportunity to thank Forest River Inc. for its donation of four park model homes to Rocky Mountain National Park, which Park Superintendent Darla Sidles said would be used for sorely needed employee housing.

May said that poor employee housing – which he likened to “tool sheds” – was one of many examples where the U.S. National Park System is in dire need of improvement. Others he cited included an updated campground reservation system, but the biggest one is the “modernization of campgrounds and restructuring.”

“Folks, we need to go to work. We need to get to it – and we will. We’re going to get things done,” said May, who served as a U.S. Navy Seal team member alongside Zinke.

While he did mention that perhaps campgrounds could be constructed on public lands operated by the Bureau of Land Management, May stressed the conditions of the current National Park campgrounds need immediate attention. He called upon the RV industry to partner with the department and park system and together they can develop the campground of the future, in an allusion to Hugelmeyer’s presentation.

The “Campground of the Future” was part of a far-reaching presentation by Hugelmeyer, who touched on a number of familiar topics including touting both the 2019 RV Experience (RVX), set for next March in Salt Lake City, Utah. He also celebrated the robust state of the industry, where he said 10 of the last 12 months the industry has surpassed 40,000 wholesale shipments. Prior to that, he added, it had only been accomplished a total of two months in the history of the industry.

The “Campground of the Future” is a project very much in the concept stage, Hugelemyer said, but it already has willing partners in the U.S. Department of the Interior, the State of Utah, and, perhaps, Kampgrounds of America (KOA).

“We’re looking to connect those dots, and by connecting those dots our hope is that we work with Utah to do some pilot models and introduce them at that time and celebrate them. But what we have here is an opportunity for us to rethink campgrounds in the country,” Hugelmeyer told RVBUSINESS.com, the sister publication of Woodall’s Campground Management.

Utah’s participation was cemented, he said, when the RVIA Show Committee did a site visit for next spring’s RVX show. When the Campground of the Future concept was mentioned, Hugelmeyer said Gov. Gary Herbert immediately pledged his support.

Toby O’Rourke, president of Kampgrounds of America Inc. (KOA), shared updated statistics from KOA’s recently released 2018 North American Camping Report. She told the large crowd of RV industry leaders that the camping lifestyle is becoming more popular, with 77 million camping households in the U.S., a number that has grown by 6 million since 2014.

“Thirty-nine million households are camping every year, that is a 20% increase since 2014,” explained O’Rourke. 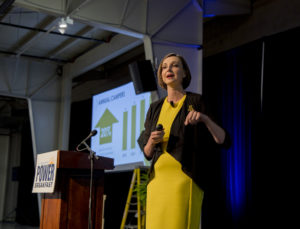 The diversity of campers is also increasing, with African Americans now representing 14% of all new campers, according to the report.

“Campers are trying out RVs before they buy them and it really reemphasizes how important quality is,” O’Rourke explained.

She wrapped up her presentation by elaborating on the need for the RV and campground industries to work together.

“It is a natural marriage,” O’Rourke noted. “We need to be more aggressive about working together.”

O’Rourke also told RVBUSINESS.com that her company would be very open to joining the project.

“We’ve actually been doing work ourselves on what the ‘Campground of the Future’ looks like, so I think there’s definitely a great way that we could work with the RV Industry Association on the concept,” O’Rourke said. “We definitely know about campground design. That’s what we do, and hopefully we can be of help.”

Also of note, Hugelmeyer announced the rebranding of RVIA into the “RV Industry Association.” The reason for this, he said, is it better and more quickly conveys exactly what industry the association represents. A new logo representing this rebranding was unveiled, and set to be released in the coming months is a redesigned RVIA website that, among other new and improved functions, will provide more efficient access to a variety of industry reports.