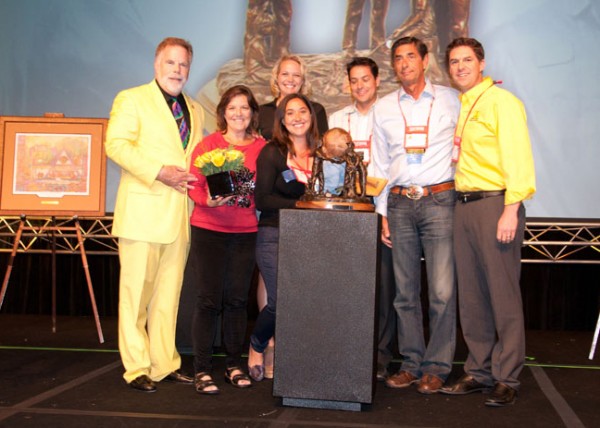 The San Diego Metro KOA Campground was named 2013 KOA Franchisee of the Year Friday (Nov. 16) during Kampgrounds of America’s annual International Convention at the Gaylord Palms Resort in Orlando, Fla.

The San Diego Metro KOA is the first repeat winner of the award in KOA’s 50-year history. The Bell Family, owners of the San Diego campground and another park – Williams/Grand Canyon KOA in Arizona – also won the award in 1985.

“The Bell Family is a perfect choice to be our top campground for 2013,” said KOA President Pat Hittmeier. “The Bells have three generations currently working at the campground. That park has literally been their lives for the past 45 years.”

The San Diego Metro KOA is a tree-lined jewel in the heart of Chula Vista, just south of downtown San Diego. Patriarch Ted Bell built the campground in 1967 while working his “other” job as a detective for the Chula Vista Police Department. His son, Mike worked at the campground since age 13 and made the KOA his full-time job right after college. Mike’s sons and daughter – Josh, Clint and Molly – were all raised on the campground and all still working for the family business.

“The Bells run a very tight ship, and they do everything right,” Hittmeier said. “Their values, work ethic and desire to provide the best experience possible for their guests align perfectly with Kampgrounds of America.”