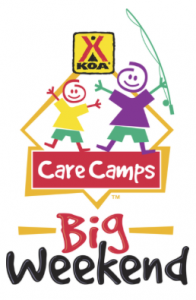 With just three weeks to go before the Kampgrounds of Americas Inc. (KOA) Care Camps Big Weekend May 11-12, reservations are running well ahead of the totals for the same period in 2017.

“The Care Camps Big Weekend has been the official start to our summer camping season for the past 14 years,” said KOA President Toby O’Rourke. “It’s simply a wonderful way to offer our guests a way to start their camping a bit earlier than they might have otherwise considered and at the same time raise funds for the Care Camps charity for kids with cancer.”

This year, a total of 402 KOA locations in North America are participating in Care Camps Big Weekend. Campers that stay as paying guests at a participating KOA on Friday, May 11 receive a night of camping on Saturday, May 12 for $20.

The entire $20 amount is provided to the Care Camps charity.

For a complete list of participating KOAs, go to koa.com/national-events/care-camps-big-weekend/

For more information on the KOA Care Camps charity, go to koacarecamps.org.