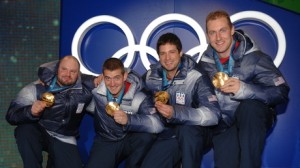 Kampgrounds of America Inc. (KOA) picked a winner when it decided to become a major sponsor of the U.S. Bobsled and Skeleton Team at the 2010 Olympics in Vancouver, British Columbia.

The U.S.’s four-man bobsled team No. 1 took the gold medal in exciting fashion Saturday during the next-to-last day of Olympic competition.

The four-man team, which also is the current world champion and World Cup Champion team, claimed the first U.S. gold medal in four-man bobsled since 1948.

“KOA is a great company and proved to be an enthusiastic partner,” said Darrin Steele, CEO of the United States Bobsled and Skeleton Federation (USBSF). “We depend on sponsorships like this one with KOA to have success like we had at this Olympics.”

Kampgrounds of America CEO Jim Rogers congratulated the USA team and said the relationship between the team and KOA has been rewarding for both sides.

“The Winter Olympics brought the world’s elite athletes together to demonstrate the very best in outdoor recreation. Both KOA and the USBSF share a passion for dedication, hard work, competitive excellence and national pride and we are proud to be a member of the USBSF family.”

For more on the team’s Olympic results, go to www.bobsled.teamusa.org.

U.S. four-man bobsled team in action prior to the 2010 Winter Olympics. Note the KOA logo on front of sled.