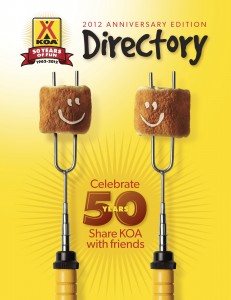 Kampgrounds of America is celebrating its 50th Anniversary this year with 23 new campground locations added to the 2012 KOA Directory.

The 23 new locations throughout North America bring the total of KOA campgrounds to 485, according to a KOA news release.

“We do our best to find campgrounds that are just the right fit for our campers and the KOA system,” said KOA Assistant Vice President for System Development Chris Fairlee. “There are more than 8,000 private campgrounds in North America, but we are pretty selective. Not just anyone can fly the KOA flag.”

The 50th Anniversary Edition of the famous KOA Directory again provides campers with not only complete descriptions and “last mile” locator maps to all KOA locations, but also a complete set of state and provincial atlas maps, making the KOA Directory the only planning tool campers need to plot their travels.

“Once again, we’ve done a great job of adding beautiful campgrounds right where our campers want to go,” said KOA President Pat Hittmeier. “For instance, we added two more locations in the Orlando area to allow our campers to be right in the middle of the Orlando attractions, or a little farther out – KOA camping any way they like it.”

Flying the yellow KOA flag has already been a boon for the new Kampgrounds of America parks.

“Being a KOA has already brought out campground a lot more business,” said Robyn Chilson, owner of the Meadville, Pa. KOA. “We have more visibility and the phones are ringing off the hook. We have new campers in the park. We are very happy. KOA is a class act all of the way around.”

New KOA campgrounds listed in the 2012 KOA Directory include: