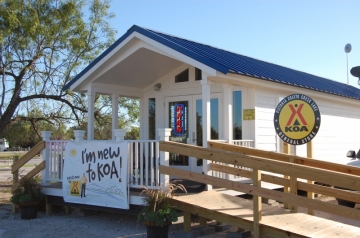 Scooter and Gail Reaser knew a great opportunity when they saw it.

So, they decided to convert the 60-acre pasture that they owned near the reservoir into a top-notch campground, according to a news release.

In the current economy, newly constructed campgrounds are a rarity. But trying something a bit different didn’t scare Scooter or Gail.

In October, they opened Phase 1 of the new Victoria/Coleto Creek, Texas KOA Campground, which included 124 campsites, each with free cable television and Wi-Fi, a patio with barbecue, a 10,000-square-foot Kamp K-9 pet playground and a nature trail that meanders through acres of undeveloped land.

Coming soon will be Phase 2 and Phase 3, which include a large pavilion and additional recreational activities including bicycle and watercraft rentals and an additional 200 campsites.

“Those plans will be far easier to complete, now that we have the infrastructure in place,” said Vernon (Scooter) Reaser. “The initial challenges of getting the permits, the electricity and sewer, and engineering are now done. Basically, it’s been like building a small city – far from existing services – from the ground up.”

The Reasers are dedicated to making everything on their KOA top notch. Guests entering the campground will see a palm-tree-lined, double-lane boulevard with the U.S, Texas and Kampgrounds of America flags flying high on a circular island.

“The state flag of each guest’s home state will be flown throughout their stay here,” said Gail. “You can drive up and see your own state flat and know that someone from your state is here, too. I’m looking forward to seeing everybody with their campfires and barbecues going, having fun, enjoying the park and the outdoors.”

While the campground has it’s own catfish pond, as well as hiking trails and swimming, the KOA entrance is just 100 yards from the Coleto Creek Lake Reservoir entrance, so boaters and watersports enthusiasts can stay as busy as they like. 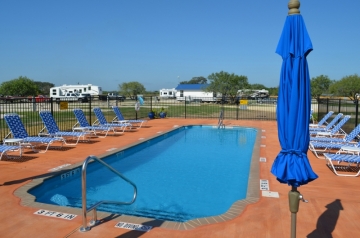 The pool at new KOA in Texas.

One of the Reasers’ top priorities was keeping the natural landscape intact.

“We wanted to keep as many of the native trees as possible during the construction process,” said Gail. “Each and every tree was individually identified with its own bar code, so we could work with the engineers to select the best ways to avoid them. People who visit sometimes say, “Oh my gosh, you wasted a lot of land,” but it was intentional. We didn’t want to lose the big, bright wide-open spaces of Texas. We’ve always loved the outdoors, so we wanted to keep it intact for our guests.”

“We’re close to three major highways, halfway between Victoria and Goliad, so whether people are heading to the Rio Grande Valley, the Coast or down to South Padre, we’re a great place to stop for a while,” said Scooter.

The Reasers hired a former KOA owner and manager, Greg Dunagan, to manage their new park. Dunagan and his wife owned a KOA campground in Kansas before Greg became general manager of three of KOA’s company-owned campgrounds in Dallas, Las Vegas and Sugarloaf Key, Fla.

“The location of this campground is extraordinary and the park itself is something special,” Dunagan said. “I can’t want for people to come here and experience it, and tell their friends about the unique atmosphere here. You just don’t find this wide-open, natural ranch feeling with the native beauty intact at most campgrounds.”

Dunagan said the campground will be a natural stop for empty-nesters and full-time RVers in the winter and shoulder seasons, as well as families with kids in the summer.