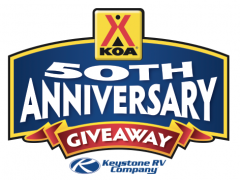 The Giveaway’s grand prize, a 2012 Keystone Vantage recreational vehicle valued at more than $40,000, is driving campers by the thousands to sign up for the contest, according to a KOA news release. KOA is also giving away 50 weeks of free camping at any of its 485 locations in North America, as well as eight $500 camping gear shopping sprees at www.Coleman.com, courtesy of the Coleman Co.

“Last summer, we ran a similar contest and gave away a Keystone Springdale RV,” said KOA Vice President of Communications Mike Gast. “We had about 100,000 entries by the end of September. This year, we have nearly matched that total, and we’ve only been going for less than two months!”

Campers register for the KOA 50th Anniversary Giveaway by going to either www.KOA.com or www.KOAKompass.com.

“Both Keystone RV Co. and Coleman have been wonderful partners,” Gast said. “As part of our partnership with Keystone, for instance, anyone sending in a warranty card for their new Keystone RV will receive a free KOA VIP-level membership in KOA’s Value Kard Rewards Program.