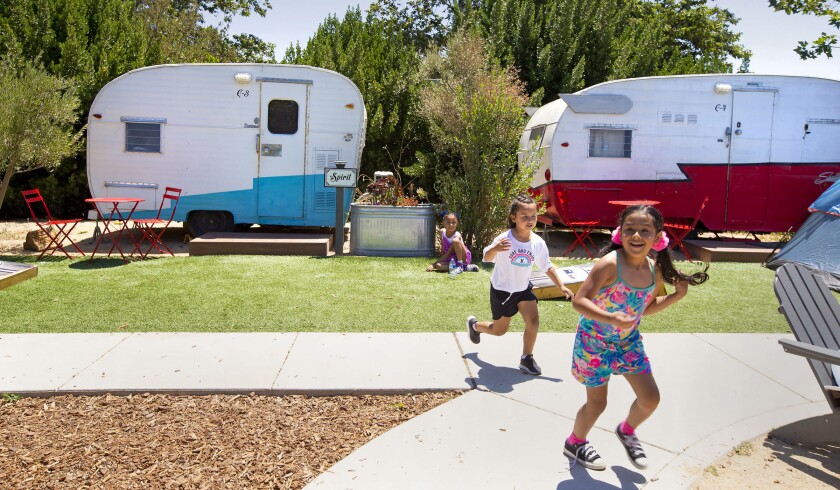 Get a blast from the past when you book your next vacation at a trailer park resort that features vintage-chic travel trailers, according to the Los Angeles Times.

The parks, a retro trend, are popping up throughout the country, with a handful in Southern California. They feature refurbished campers from the ‘50s to the ‘70s and new-but-look-vintage trailers, many built by Airstream, maker of the “silver bullet” travel trailers popular in the 1950s.

What’s the advantage for vacationers? You can skip cookie-cutter hotel rooms in favor of a too-cute-for-words trailer in the great outdoors.

“We’re a hotel, but a hotel with a difference,” said Carey Jonker, who operates Waypoint Ventura vintage trailer hotel, a campground that rents 20 vintage trailers within walking distance of the Ventura shoreline.

Vintage trailers are usually rebuilt from the floor up, have funky-but-cute decor, air conditioning, heat and fully functional kitchens and are equipped with decks and outdoor furniture. Many have showers, flat-screen TVs and Wi-Fi. Most of the parks are multi-function, with spaces for RV owners, and feature amenities such as pools, playgrounds, rental bikes and outdoor games.

A resurgence of interest in the shiny-skinned Airstream trailer has brought new devotees into the fold.

This year, as the company celebrates its 90th birthday, it has found a new audience that admires its nostalgic cachet. Matthew McConaughey, Sean Penn and Sandra Bullock are among its fans. Airstream’s new vehicles have become so popular that the company says it may take a year to fill current orders.