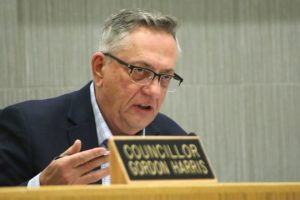 Fort Saskatchewan Councillor Brian Kelly presented a motion to allocate money to a study on a permanent campsite location in Alberta.

Strathcona County, Alberta, land being annexed by Fort Saskatchewan could include a campground down the line, one Fort councillor says, according to Sherwood Park News.

At Fort Saskatchewan’s Oct. 9 council meeting, a motion was presented to take on a study of where to place a Lions Club Campground, currently located at Turner Park — which is noted only as a temporary home.

The motion passed 5-1 (one councillor absent), but the down-vote by Councillor Ed Sperling provided insight into what could be made of river valley land included in the 2,352 acres to be purchased by the city for just over $500,000, as part of an annexation agreement with Strathcona County.

While Sperling said he supports finding a new home for the Lions Club Campground, he noted it may be prudent to see what rolls out with annexation first.

“We do have an annexation underway right now with our neighbour. It is uncontested — that doesn’t mean that it is going to be approved (by the province),” Sperling said. “It doesn’t prove the possibility that it would be a successful (annexation) and in a fairly reasonable length of time.”

The provincial review of the annexation agreement is anticipated to take between one and two years, and could go longer if the Municipal Government Board deems it necessary.

“We got new land brought into the city, including river valley lands that may be a good site for a campground location. I just think we’re being a little too quick with this,” Sperling said.