By: Woodall's Campground Management|Published on: May 18, 2020|Categories: Industry News| 0 comments 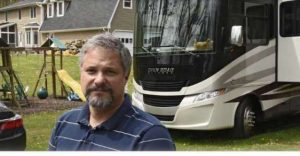 Roy Jacobsen stands in front of his RV which is parked in a relative’s yard on Friday (May 8).

“This is the type of thing that defies common sense,” said Cameron Macdonald, executive director of the Government Justice Center non-profit law firm, according to reporting by Rick Karlin in the Albany, N.Y., Times-Union.

The status of RV parks during the coronavirus epidemic has varied from county to county and even town to town with a patchwork of government entities, including county health departments, municipalities and the state all playing various roles.

As a result, some counties have allowed parks to open, while others have not. That’s prompted an outcry from a group of seasonal residents at Deer Run RV Park, which hasn’t yet opened since Rensselaer County parks remain closed.

“The county needs to issue permits now, and ESD needs to confirm private campgrounds can open, consistent with its existing guidance deeming hotels and other places of accommodation essential infrastructure,” it reads.

Macdonald in the letter noted that the ESD regional offices in other parts of the state have confirmed that campgrounds can open. An executive order from Gov. Andrew Cuomo said that campgrounds which house people are essential businesses that should remain open. But Rensselaer County officials maintain they need an explicit go-ahead from the state ESD.

“We agree that ESD needs to clarify the order and numerous other counties also agree with that observation. Rensselaer County has already told campground owners the county will comply with state directives on the issue,” said Operations Director Richard Crist.

The Government Justice Center’s letter was written on behalf of Frank Gevenick, who with his wife was planning to haul their seasonal home from Florida to Deer Run for the summer. They were originally Capital Region residents who now live in Florida.

Others are in the same predicament, and the Times Union has received several letters from snowbirds unable to get into Rensselaer County campgrounds so far.

Macdonald believes the dispute is emblematic of the problems and confusion that will face people across New York as it struggles to re-open various regions as the pandemic eases.

The group has pushed a number of local municipalities including Colonie and Queensbury to follow open meetings and freedom of information laws. It has also opposed publicly funded elections.