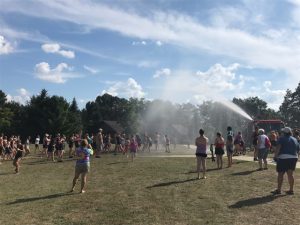 Lippert Components Charitable Giving Team volunteered at Camp Catch A Rainbow, in Mich., this past week.

The camp is supported in part by Kampgrounds of America (KOA) Care Camps, a system of 129 specialized summer camps, located throughout North America, that provide week-long summer camp experiences to children with cancer and, in some cases, their siblings and families.

“Camp Catch A Rainbow doesn’t just offer a free week-long camp to children affected by cancer,” reports Michilah Grimes, Lippert Components Inc.’s director of philanthropic partnerships, regarding a charity that has been gaining support across the board recently in various niches of the RV and campground industry. “They provide an opportunity that allows them to be who they are — a child, laughing and playing outdoors. It gives them a chance to create lasting friendships with those that can truly understand what they are going through.”

More than 90 children were in attendance, with activities ranging from an inflatable slip-n-slide to water gun fights and volleyball, as well as arts and crafts, said Grimes, adding that LCI volunteers helped the kids play volleyball regardless of their limitations.

Especially inspiring for Grimes was one LCI team member, Leah Benavente, who had spinal cancer as a teenager.

“Once upon a time, I was a kid with cancer just trying to be normal,” she told Grimes. “It’s places like Camp Catch A Rainbow that give kids a safe place to be just a kid and not a cancer patient. Cancer changes your identity. The KOA Care Camps give it back.”

Grimes said charity-minded LCI, an RV and marine industry supplier based in Elkhart, Ind., started getting involved in the KOA Care Camps charity earlier this year after meeting with Wade Elliott, chairman of the Care Camps board of directors and president of the Utility Supply Group, a Washington State-based supplier of electrical pedestals to the RV park and campground industry.

“I knew that day that I wanted to take our team to see the difference these camps are making in the lives of young children all across the country,” she told RVBusiness, sister publication of Woodall’s Campground Management.