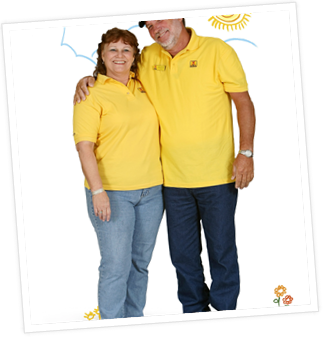 Merry and Ronnie Motley, co-owners of the Leander/Northwest Austin KOA.

Originally called Sunshine RV Park when Ronnie and Merry Motley opened it in 2005, Leander/Northwest Austin KOA in Texas has more than 60 RV sites and four tent sites, plus lodges, cabins and amenities.

“We used to do a little RVing and enjoyed it, and one day Merry decided she wanted an RV park, so I built it,” Ronnie Motley told the Community Impact Newspaper.

He converted their home into the park office, information center and small store. Outside, there is a playground, a saltwater swimming pool with hot tub, barbecue grills, a laundry room and restroom facilities including showers.

Joining the KOA network of campsites in 2009 helped diversify the customer base, Merry Motley said.

“It’s brought in more nightly guests. Before, we didn’t have the national recognition because we were just a small park and we weren’t franchised,” she said. “We have a distinct class of visitors who come in, and a lot of families with kids as well.”

Many Leander KOA campers are drawn to the nationally recognized KOA name, said Jason Anderson, who helps manage the park with his mother and stepfather, the Motleys. He said campers from across the United States keep KOA Leander at about 70 percent capacity most of the time.

“KOA is known for families and groups. In the winter time, we cater to an older crowd who call themselves Winter Texans. Then we’ve got spring break crowds and SXSW groups that come in, which is a whole different group,” he said. “When it comes September and October, it tends to be more of a crowd of storm chasers: people who fix dents and estimators and insurance adjusters. When the storm is done, there’s a whole influx of people who come in after that, who travel the nation in RVs.” 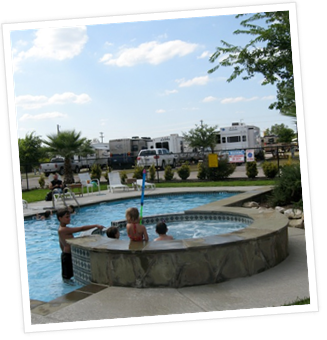 RV camper George Ohm and his wife sold their Pennsylvania home to live near their daughter, who resides in Cedar Park. He said the people and the park drew them to Leander KOA.

“The people are nice. I can yell at them and carry on with them, and they yell right back at me, but they know if they need me, I’m here,” Ohm said. “They treat me good, and they ask if I want to be included in stuff. They enlisted me to lock up at night, so they trust me enough.”

Over the next year, Leander KOA has planned upgrades to the park, including the addition of an outdoor shower, an outdoor kitchen and six new cabins.