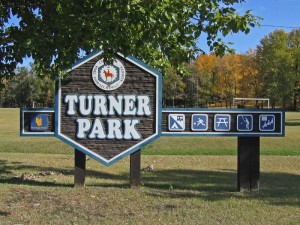 The entrance to Turner Park, whose campground is run by the Lions Club in Fort Saskatchewan, Alberta.

The campground expansion, which has been debated for years and is currently being run by the Fort Saskatchewan Lions Club in Alberta, was approved by council at the Aug. 27 regular council meeting pending a few friendly amendments.

Before the council will give the OK to the project, it required that an environmental impact study be conducted on the area to determine the affect that the expansion would have on the site, the Fort Saskatchewan Record reported.

The amendment, which councillor Frank Garritsen put forward, also calls for the Lions Club to cover any extra expenses procured in the study and states that the expansion is subject to an agreement that is satisfactory to the city.

“If there are some trees or animals or anything that’s down there that is special, and if this campground would have an affect on these species, then there really needs to be some careful consideration,” Garritsen said, explaining the environmental study motion.

“If there is going to be a huge impact somewhere along the line, then it has to be rethought.”

Councillor Tom Hutchison, who put forward the motion to allow the Lions Club to expand the site, said before council that the expansion was necessary as the current grounds are always filled to capacity.

“I live in that area, it is my backyard,” he said.

“The campground is at capacity the majority of the time and we are in dire need of more spaces.”

During the delegations portion of the council meeting the floor was open to seek public input on the matter.

Six residents spoke against the campground expansion, while three spoke in favour.

However, the motion, with the friendly amendments in place, was passed unanimously, something that Lions Club president and city councillor Don Westman said was the right call.

Westman also commented on the friendly amendments saying they were “not a problem.”

During deliberations on the matter it was brought before council that Westman should abstain his vote due to a conflict of interests being the president of the Lions Club. This decision was however dashed as legal advice determined Westman would see no financial gain from the matter and was therefore under no legal obligation to abstain.

If the campground expansion does go ahead it will see the amount of lots increase from 25 to roughly 95.