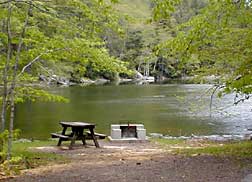 A campsite near the pond in Devil's Tombstone Campground.

A proposal by the state of New York to close Devil’s Tombstone Campground in Hunter, N.Y., would hurt the local economy, Greene County lawmakers said.

The county legislature on Wednesday (April 21) unanimously adopted a resolution calling on the state to rescind its decision to close the campground. Devil’s Tombstone is one of seven campgrounds and two day-use facilities the state Department of Environmental Conservation (DEC) is considering closing as a way to save money. The facility in Hunter is the only one on the proposed closing list located in Greene County, according to the Daily Freeman, Kingston, N.Y.

County Legislator Larry Gardner, D-Hunter, said he lives about two miles from the campground and believes the state’s decision is “ill-advised.” He said there are many people who stay at the campground and patronize the local stores and restaurants, which is a boost to the economy.

“We’re a seasonal resort community,” Gardner added. He said the town and county rely on visitors to the area and closing the campground would hurt that trade.

The county’s resolution states in part that Devil’s Tombstone is one of the oldest state campgrounds in the Catskill Forest Preserve and provides camping sites, picnic sites and access to several hiking trails up Hunter Mountain. It also states the campground contributes to tourism and its closing would result in lost sales tax revenue and lost support for local businesses, affecting the economy of all the mountaintop towns.

“It is the opinion of the Greene County Legislature that such a closure and the related impacts should be more thoroughly analyzed prior to taking any action with such potentially significant detrimental community effects,” the resolution states.

Interim County Administrator Dan Frank said there is no way to put a dollar figure on how the closure of Devil’s Tombstone would affect the local economy. He said tourism is a big issue for the county and one of the largest ways it derives income.

“It’s all about having things for people to do,” Frank added.

In addition to Devil’s Tombstone, the DEC plans to close Bear Spring Mountain in Delaware County and seven other sites in the Adirondack Mountains.