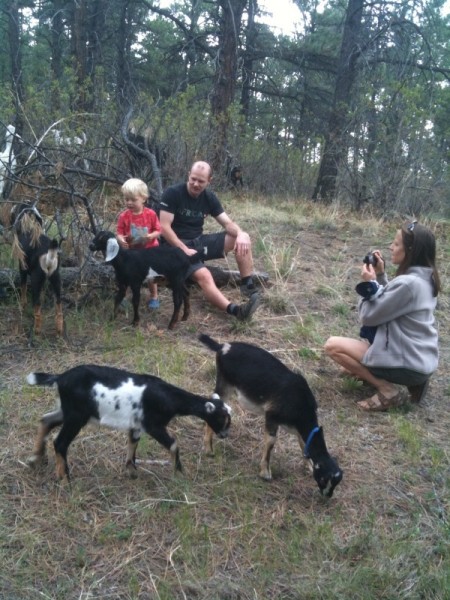 Some of the goats at the Jellystone Park in Larkspur, Colo.

Leisure Systems Inc. (LSI) has awarded Ian and Sally Steyn the Jim Webb Spirit Award and the Entrepreneur of the Year Award for their innovative efforts at Jellystone Park at Larkspur in Colorado.

But while the Steyns have rolled out some of the more innovative practices in the LSI network, including the introduction of on-site organic farming as well as the use of goats to groom hiking trails and the park’s disc golf course, the Steyns actually draw their inspiration from other Jellystone Park operators they come into contact with at LSI meetings, according to a news release.

“They are an inspiration to us,” Ian Steyn said. “It is just so inspiring to be at those meetings and just listening to them talk amongst themselves about the different things that they are doing and the things going on with their businesses.

When I accepted the Jim Webb Award, I said to them, ‘This is a reflection of how you all have impacted me. I hear you and watch you.’ It’s a remarkably positive environment to be around. It inspires you to get to the next level of whatever it is you are working on.”

Steyn also credited his rangers for their efforts in making every effort to satisfy guest expectations and said he and his wife derive great satisfaction from creating a place where families can build memories together.

“We have ‘free range kids’ at Jellystone Park,” Steyn said. “Children can go out and climb and run around and get dirty and parents feel safe letting them do that.”

Equally important, Steyn said, is the opportunity Jellystone Park provides for children to interact with one another without computers. “They can learn what real play is and develop a sense of discovery in nature,” he said.

And at mealtime, families can come together, share their experiences and simply communicate with one another. Indeed, in an age when personal computers, cellphones and other electric games create families who lose face time with one another, camping can bring them back together, face to face.

The Steyns also try to provide educational experiences at their park.

“I love the term edutainment, the mixing of education and entertainment,” Stein said.

His goats are a case in point.

Steyn brought what he thought were 24 male goats to his campground last year after a local dairy goat farmer expressed remorse over having to butcher the males since they couldn’t produce milk. But Steyn later discovered that four of the goats were “mis-sexed,” and he wound up with four doelings, who later became pregnant and gave birth.

But since Steyn bottle-fed his new goats from infancy, the animals are unusually tame, companion goats that interact gently with guests, sometimes even jumping on their laps like cats or dogs. Many accompany guests on short hikes on park trails.

In addition to providing entertainment for children, Steyn uses the goats to naturally maintain and fertilize the grass on the campground’s 2-mile long disc golf course. He also uses the does to educate park guests about the benefits of goat’s milk and the cheese that’s produced from it, which is called “chevre.” In fact, the park frequently holds classes for guests who want to learn how to milk a goat and make various products from it, including cheese, butter, ice cream, pudding and goat soap.

Steyn introduced actual dairy goats to his park in November.

Guests also help with bottle-feeding, since young goats need to be fed three times a day. Some guests have even adopted some of the goats, and care for them on a regular basis.

The Steyns bought their campground in 2005 and converted it into a Jellystone Park in 2009. The park has 150 RV and tent sites, including roughly 20 rental accommodations, such as park models, RVs, yurts, safari tents and tipis.

For more information about the goats and other family activities and attractions at the Jellystone Park at Larkspur, visit www.jellystonelarkspur.com.