Campground consultant Bob MacKinnon is one of three Americans asked to speak at the Hangzhou International Outdoor and Leisure Fair in China March 4-7.

“I will be talking to them about the key issues a campground developer is concerned about, including site selection, market conditions and design of a park,” he said. “I hope to walk them through what they need to look at when they are selecting a site, and get them thinking about key markets to look at. This is an important initial step in their determination to move forward with their own RV industry. The site selection and design are contingent on the market they are going to serve.”

The other American speakers are Al Hesselbart, historian of the RV/MH Hall of Fame in Elkhart, Ind., and Joe Laing, director of marketing, El Monte RV in El Monte, Calif. The European RV industry will be represented by Wolfgang Bock of Munich, Germany.

The men will be speaking to Chinese provincial government officials as well as industry trade leaders on their assigned topics.

Hesselbart will talk about the evolution of the RV lifestyle and its effect on American society.

“I am going to show the evolution of what camping was like from the World War I era up to today when 30 million people are a part of it,” he said.

“What they are looking for me to touch on is the future of the RV rental market in China,” Laing explained. “I will talk about what has happened in the United States in the RV rental market over the course of time and what we see as some possibilities in China. They have an affinity for this, but need education and understanding. They need to develop campgrounds, their publications and infrastructure.”

“What we see for China is this is not something that will happen overnight, but we think this has great long-term potential,” Laing added. “If the RV industry develops in China, there is the potential for Chinese tourists to come and rent RV’s here in the United States.”

Outdoor Lifestyle Hangzhou is jointly organized by the China Chamber of Commerce for Import and Export of Light Industrial Products and Arts and Craft, and Hangzhou Municipal Government. The event will be held at the Hangzhou Peace Exhibition Center. For more information visit www.outdoorhangzhou.com.

The upcoming visit to China is the latest in a series of cultural exchanges between the RV sectors of the two countries. 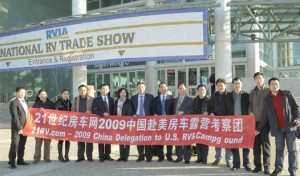 The delegation of approximately 60 included Chinese manufacturers looking to form joint ventures with U.S. manufacturers, companies looking to develop campgrounds in China, government officials, and private equity firms. One delegation was led by the Beijing office of the U.S. Department of Commerce. Several RVIA member companies reported enjoying substantive conversations with the Chinese delegates about the burgeoning industry’s plans for the future.

“I was impressed by the number of Chinese representatives who attended this year’s show and the great interest in RVing that seems to exist among the Chinese people,” said RVIA President Richard Coon, who was interviewed extensively by Chinese media during the show. “Next year, the Department of Commerce hopes to bring an even larger delegation over and to schedule additional meetings between U.S. and Chinese manufacturers.”

In addition to attending the National RV Trade Show, some of the Chinese delegations also visited campgrounds in Nevada and California as well as RV manufacturing facilities in Indiana and California.

In May 2008, a delegation representing the American RV industry attended the 2008 China RV and Camping Show in Shanghai. The American delegation encouraged Chinese manufacturers to adopt U.S. standards and educated Chinese government officials on internal infrastructure issues within China that might affect the RV market there.