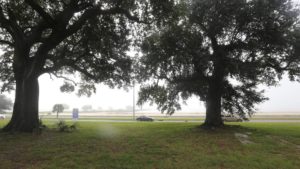 This 23-acres piece of land on U.S. 90, just west of the old Broadwater in Biloxi, shown on Tuesday (Oct. 30), is being cleared to develop an upscale RV park.

One Majestic RV Park is tucked amid the oak trees on Pass Road and another is coming to the beachfront in Biloxi, Miss., according to the Sun Herald.

“It probably will be the largest one on the coast and have more amenities,” Sam Ford said of the new RV park. An agent with Coldwell Banker Commercial Alfonso Realty in Gulfport, Ford represented Trustmark Bank in the $2.95 million sale.

“This 22.8 acre lot was one of the highest priced listings in our state and is situated on prime beachfront property,” Ford said. It is one block east of the Mississippi Coast Coliseum and just west of the former Broadwater Hotel property, near Brady Drive.

“They have the right zoning,” Ford said, and site preparation already has begun.

The owners love the trees, he said, and like Majestic Oaks RV Park on Pass Road at Veterans Avenue, the new RV park will have trees and landscaping.

Before Hurricane Katrina, the property had homes on it and a proposed project called “Pelican,” he said.

“When the storm hit the deal went away,” he said.

The property actually is four parcels assembled into one large piece of land. Due to the size of the property, he said, the land was for sale for several years.