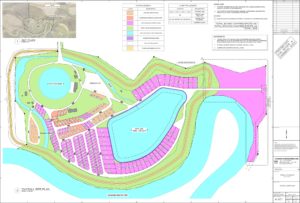 A map outlining the plans for Turtle Crossing, including a manmade lake, new camping spots and a dike along the Assiniboine River.

Considering himself to be a local flooding expert, Manitoba’s Turtle Crossing campground co-owner Mark Kovatch says he has about had it with his property flooding with Assiniboine River water.

So, he’s joining his wife and co-owner Joan in doing something about it, according to The Brandon Sun.

Last month, they submitted a zoning application to the city of Brandon, to build a ring dike around their property.

At an estimated cost of $1.2 to $1.5 million, they also plan on increasing the number of camping and seasonal lots available from their pre-flood number of 165 to 275 to help recoup costs.

It’s a project Kovatch said he’d like to get moving on as soon as possible, but more realistically they won’t break ground for at least a couple of years.