Many Slips and Falls Claims Getting a 2nd Look 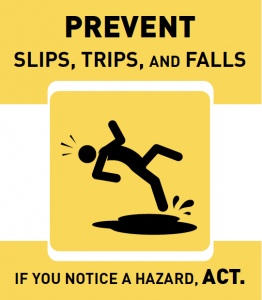 Editor’s Note: The following information appeared in the Winter issue of “The Source,” a publication of Evergreen MGA. It concerns the latest trends from the National Insurance Crime Bureau (NICB) which reports that many slip and trip claims are getting a second look.

The National Insurance Crime Bureau (NICB) said that “slip and trip” claims targeting businesses and their insurance companies are beginning to be scrutinized more carefully for potential fraud.

An analysis of questionable slip and fall claims submitted by NICB member companies showed a 57% increase in the number of referrals over the past 2 1/2 years. More than 4,600 questionable claims were received in 2008, 2009 and the first half of 2010. Most of those claims were tied to commercial insurance policies similar to your Evergreen MGA insurance policy.

“While many people have legitimate accidents in businesses across the country, we’ve seen a growing number of cases that have some indication of potential fraud,” said Joe Wehrle, NICB president and CEO. “Our agents, working with insurance company investigators and law enforcement, are busy identifying and targeting” those people “that make a good living staging slip and fall accidents.”

Although the NICB uses data and stats from a variety of businesses and sources, the common scenario for slip and trip fraud involves both organized crime rings that target big box stores, and fraud that targets smaller businesses like campgrounds and RV parks. In either case, the claimant “hopes to collect a quick payout and move on before anyone realizes what’s going on” says  Wehrle.

“A typical slip and trip case may involve two people going into a store or retailer, and splitting up. The first person goes down an aisle while the other keeps a lookout. When the coast is clear, he or she pulls out a small bottle of liquid, pours it on the floor and then pretends to fall on the floor. The partner runs to assist and tells everyone that he witnessed the fall.”

“Fortunately, we’ve worked with insurers to raise the awareness level and urged companies to analyze claims before they pay. The bad news is, many retailers are self-insured and they look at this as a cost of doing business – they’ll write a check without investigating. Based on what companies have told us, we think that adds up to millions of dollars in unwarranted payouts. We’re reaching out to these companies and urging them to join us in fighting commercial fraud.”

The number of questionable slip and trip claims that were submitted to NICB went from 325 in the first quarter of 2008, to a high of 565 in the fourth quarter of 2009. In the first half of 2010, there were 997 slip and fall claims referred to NICB for further analysis. New York, Los Angeles, Philadelphia, Las Vegas and Chicago were the five cities with the most questionable claims for slip and falls, and California, Florida, New York, Illinois and Texas were the top five states.

Same-surface falls can be classified into four categories:

1. Trip-and-fall accidents, in which pedestrians encounter a foreign object in their walking path.

2. Stump-and-fall accidents, in which a moving foot encounters an impediment in the walking surface, whether it is a tacky point on the surface or a defect that impedes the foot.

3. Step-and-fall accidents, in which the foot finds an unexpected failure or hole in the walking surface.

4. Slip-and-fall accidents, in which the interface of the shoe and the floor fails to support the walker’s center of gravity over the base area.

The slip and fall is the most common accident. Foot contact is broken, and the individual attempts to right himself or herself. Recovery of equilibrium is reflexive and not under conscious control in most cases. If the pedestrian strikes the surface with a fleshy part of the body, the injuries are likely to be minimal, but if the victim strikes a bony body part, the injuries may be more severe.