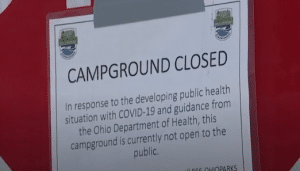 Ohio’s state parks have opened back up but campgrounds remain in limbo. (Photo: WSYX)

Ohio’s state parks have opened back up and many are now urging the state to open up campgrounds. Gov. Mike DeWine says people should be allowed to camp “soon” and is expected to announce a reopening date in the next couple of days, according to a report by ABC affiliate WSYX in Columbus.

But some feel it’s unfair campgrounds are still closed but big-box retailers are allowed to open back up. Camping is a long-time tradition for Aly Wilson and her family. However, because of the state’s stay at home order, her planned Memorial Day Weekend camping trip is now in limbo.

“We already had to cancel four camping trips. We have 15 more scheduled until October,” said Wilson. However, the state has yet to set a reopening date for campgrounds. The only exception is for anyone with a preexisting full season agreement. On Tuesday, Lt. Governor Jon Husted provided a small update on re-opening Ohio’s campgrounds. Husted says the state is still working hard on guidance regarding both public and private campgrounds. They just need to figure out how to deal with “shared facilities.”

Wilson, who is also a nurse, says she wonders why big-box retailers can open up but camping still isn’t allowed. “Most campers are self-contained. We have our own restroom, our own kitchen where we can cook like what we would do at home,” said Wilson. ODNR says you may not be able to go camping, but you can hike, fish and boat at all Ohio State Parks except for at Hocking Hills.

For Wilson and her family, they’re just now hoping for the best and for an answer soon. “States around us are open so people are waiting – are we going to be canceled, do we need to make reservations somewhere else in one of the adjoining states?” said Wilson.