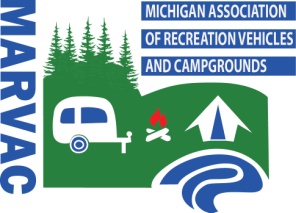 Since 2013, the Michigan Association of Recreation Vehicles and Campgrounds (MARVAC) has been advocating on behalf of Michigan RV consumers and RV dealers for a “sales tax on the difference” policy, which, after a rare move by the Michigan Legislature, went into effect on January 18.

“Educating and working with the politicians in Lansing and around the state was a major directive for MARVAC for the last five years,” said William Sheffer, executive director of MARVAC, in a press release.

In June 2017, Senate Bills 94 and 95 were passed by the senate, which allowed for a person trading-in a used RV to purchase a new RV to be taxed only on the difference between the value on the trade-in and the new RV price.

Governor Rick Snyder vetoed the bills in July 2017, but in an unusual move by the legislature, the veto was overridden. These bills mark the first time a Michigan governor’s veto has been overturned since 2002.

“This is a great deal for those who enjoy RVing but may have been holding off on purchasing a new RV,” said Sheffer. “In addition to being great news for the RV consumer, RV dealers are thrilled because it gives them another sales tool.

“These Public Acts 1 and 2 of 2018 are not only benefiting family-run businesses, but the state economy as a whole,” Sheffer continued. “We are pleased the dedicated effort of MARVAC on behalf of RV enthusiasts across the state has come to such a beneficial outcome.”