Maryland Park Awaits a Plan for Its Development 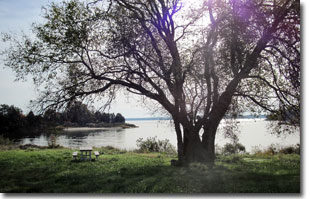 A view of the Newtowne Neck State Park on Maryland coast.

Last month, the office of Sen. Ben Cardin, D-Md., distributed a press release announcing $400,000 in federal funds, along with $400,000 in matching state funds, for the development of Newtowne Neck State Park in Compton.

The release said the money would be used to fund the construction of hiking, biking, equestrian trials, tents and RV camping sites, cabins and motorboat access.

However, there is no plan for the park yet, officials said Monday (Oct. 24), the Southern Maryland Newspapers Online reported.

Newtowne Neck State Park is 790 acres of waterfront fields and forest first owned by the Jesuits until 2009 when Corporation of Roman Catholic Clergymen sold the land to the state. It is surrounded by St. Clement Bay, the Potomac River and Breton Bay.

There is no master plan for the park at this point, said Christy Bright, park manager of Point Lookout State Park, who oversees the state parks in St. Mary’s County.

Newtowne Neck State Park is being inventoried now to determine environmental areas, historic areas, wetlands, forests and topography, she said. Sometime this winter the Maryland Department of Natural Resources intends to hold a meeting to garner public comment on the park’s future use.

“There’s no master plan,” said Bob Schaller, director of the St. Mary’s County Department of Economic and Community Development. “This was like found money,” he said, that was announced last month.

Since Cardin’s office issued the press release about the funding “there’s been a lot of concern,” that Newtowne Neck would become another Point Lookout State Park, Schaller said. Point Lookout frequently turns away visitors on summer weekends when it becomes overcrowded with swimmers, campers and fishermen.