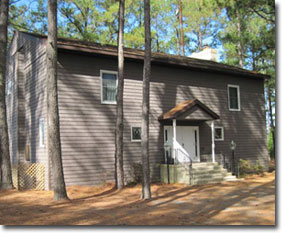 In the middle of winter when school is out and snow is on the ground, there might not always be a lot to do.

But at Jane’s Island State Park in Crisfield, Md., on Maryland’s Eastern Shore and for many other state parks around Maryland there is plenty going on for lovers of the outdoors. Maryland state parks offers a winter camping program for RV campers and for those staying in cabins, delmarvanow.com reported.

This is the park’s second year in the winter camping program, and it now offers a plethora of activities, including hiking, fishing and occasionally hunting. Jane’s Island allows waterfowl hunting on the premises.

“Sometimes the hunters come down and stay in the cabins, but mostly its local tourists that come by,” park manager Dennis Smith said.

Jane’s Island State Park has four waterfront cabins available to be rented year round. The cabins are full service and can sleep up to six people. They all have three bedrooms (two bedrooms and a loft area) with double beds, a common area, kitchen, bathroom, screened porch, air conditioning, heat, gas log fireplaces, an outdoor grill and a fire ring. The kitchens in these rustic cabins are fully stocked with ovens, stoves, refrigerators, coffee pots, microwaves and basic cooking utensils for up to six people. 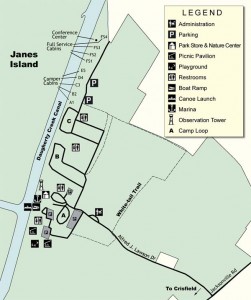 A map of Jane’s Island State Park, showing the location of cabins at top of map along the canal.

Along with the four cabins, there is also the Daugherty Creek Conference Center, a much larger cabin that can sleep up to 16 people. It includes four bedrooms, three-and-a-half bathrooms, a kitchen, common area, a second floor meeting room, two fireplaces, heating and a deck that overlooks the expansive marshes of Jane’s Island. Additional amenities are a screened porch and a large outdoor grill. The kitchen is also fully equipped much like the other cabins.

To rent one of the four cabins costs $91.26 per night, with a minimum of two nights.

However, if you’re spending it with loved ones or with friends to its maximum capacity, that’s less than $16 dollars a night per person. If the cabins are full, Jane’s Island also offers RV and self-contained unit camping.

For RV camping, there are a limited number of sites, and spots are given on a first-come, first-served basis. This is a much more affordable way to camp, as it only costs $17 per night on weekends and can cost as little as $8.50 a night Sunday through Thursday, if you have a Golden Age Pass (for those 62 and older), given out by the Department of Natural Resources (DNR).

For RV camping, there are also electric and water hookups.

The only downside is that Jane’s Island does not provide bathhouses for RV campers — a small sacrifice for an inexpensive getaway.

“Overall it’s a great winter getaway,” said Smith. “Just rent a cabin, bundle up next to a fire and enjoy the outdoors and the park.”