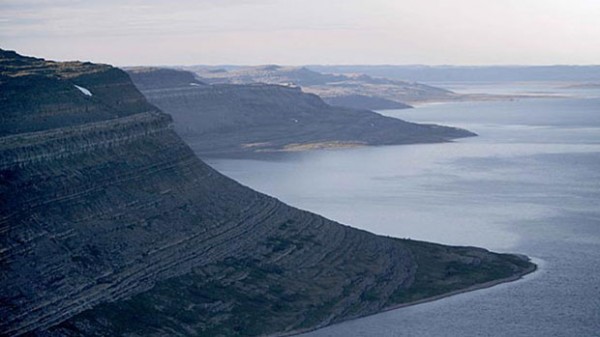 One view of a portion of the site proposed for a new national park on the eastern shore of Hudson Bay in Quebec. Photo courtesy of greenerideal.com

If all goes according to plan, Quebec could become home to the largest national park in eastern North America.

“The Parc national Tursujuq (Tursujuq National Park) has an area of over 26 000 km, (16,000 square miles) equivalent to 54 times the area of Montreal Island and will triple the area of the network of Québec’s national parks. It is the biggest protected area dedicated to the conservation of sensitive species in northern biodiversity and the natural landscapes of great beauty on the eastern shore of Hudson Bay.

Moreover, the addition of most of the drainage basin of the Rivière Nastapoka to the territory of the park enables us to achieve the goal of ensuring that protected areas cover the equivalent of 9% of Québec’s territory,” Blanchet noted.

This is the third national park to be established in Nunavik, the homeland of the Inuit in northern Quebec.

Maggie Emudluk, chairperson of the KRG, says, “The new park will protect not only the environment but also areas that are essential to the traditional ways of life of the Inuit and the Cree. A determined, united pressure group headed by our communities and regional organizations working with conservation groups has fulfilled its mission, which will strengthen our confidence in the efficacy of the environmental protection regime established under the James Bay and Northern Quebec Agreement.”

The Tursujuq National Park will offer visitors spectacular vistas on the eastern shore of the Hudson Bay. Part of the region includes the most imposing system of cuestas (asymmetrical ridges) in Quebec, part of which will be preserved in the national park. It also features immense lakes, including Lac Guillaume-Delisle, which is linked to Hudson Bay by a narrow channel called “the bottleneck,” which the Inuit call Tursujuq. 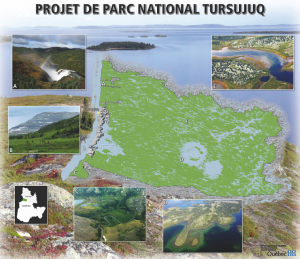 An illustrative overview of the new park in northern Quebec.

Quebec’s government says the future park will protect several sensitive components of northern biodiversity and habitats. Mention should be made, among other things, of the harbour seal population, a species likely to be designated as threatened or vulnerable in Quebec.

Beluga whales in the eastern Hudson Bay, harlequin ducks, short-eared owls, a unique population of landlocked salmon and over 80 rare plant species are also part of the territory’s varied biodiversity.