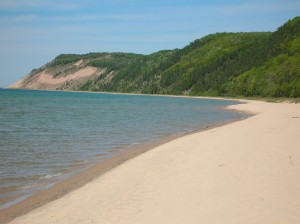 The shoreline at Sleeping Bear Dune National Lakeshore in Michigan.

How have things been going this year at the Sleeping Bear Dunes National Lakeshore near Empire, Mich.?

“Beautiful and busy,” said Dianne Flaugh, an environmental protection specialist with the national park, which has seen a record number of visitors already in 2012, with three months to go this year.

Mlive.com reported that thanks to helpful weather, the Pure Michigan tourism marketing campaign and a myriad of national media exposure in the past year, northern Michigan’s little secret is most definitely out.

The to-date visitor count is higher in 2012 than the total attendance last year, when 1.34 million visitors visited a place “Good Morning America” dubbed “The Most Beautiful Place in America” in August after the vacation spot was nominated in an online contest by a Grand Rapids man, Jim Madole.

The national park features 35 miles of Lake Michigan coastline, two islands, a scenic drive and mountainous dune climb. Earlier this year, the National Park Service announced that an economic study of national parks showed they account for $31 billion in spending and 258,000 jobs nationwide.

Sleeping Bear accounted for $120.4 million in spending and supported 2,070 jobs.

Despite the influx, the park did not need to increase their ranger staff, she said. “Everything went very well this year.”

Flaugh said the park expects to continue racking up victors tallies this year as tourists visit northern Michigan to gander at the fall colors, which are peaking right now in Benzie and Leelanau counties.

Despite the park’s lack of marketing, Flaugh said they are expecting next year to be another banner year, based on in-person feedback park staff received from visitors awed by the area’s beauty. The tourists vowed to return, park staff said.