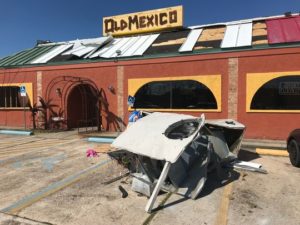 Michael Matti had a small generator powering his business — Royal Used Tires — and there was no means of communication except his buddies who stopped by with information and a cold bottle of Coors Light, according to the Pensacola News Journal.

Still, Royal Used Tires was open along 15th Street in Panama City, Fla., one of the few small businesses in the city that wasn’t devastated by last week’s Category 4 hurricane.

All around most of Bay County, at least the Panama City area, most businesses seem a tangled mess of broken glass, twisted aluminum and stark warnings against those thinking to take advantage of the situation.

“We Shoot Looters,” read one wooden sign not far from Royal Used Tires, while a nearby liquor store noted it had an armed guard on the premises.

Not quite a week following Hurricane Michael the recovery efforts are still underway, but the fact that many traffic lights don’t work and electricity and Internet service remain non-existent, means the local business community is staring down some trying weeks and months ahead.

While structures and inventory are insured at many small businesses, a considerable number don’t have small business interruption insurance, which would ease some of the pain of being closed for a prolonged period.

Tibbetts said he’s lucky as Tractor Farm & Equipment is a fairly large company with numerous locations. They’re pooling resources and getting the operation restored as quickly as possible.

Other businesses probably won’t be as fortunate he said.

” A lot of them won’t survive,” Tibbetts said.

And the ones that do likely will have a tough time for a while.

The owner of a furniture store next to Royal Used Tires fled to Miami when Michael approached.

“He asked me to look after things,” Matti said with a shrug. “There’s a huge hole in his roof.”

Another worry is that hundreds of people probably will be out of work, as it takes time for the service industry to recover. Those are people who work in hotels, beauty salons and restaurants.

Bay County, where Panama City is located, has a workforce of nearly 100,000 with a jobless rate in September of 3.4 percent. That could drastically change in the next few weeks.

That’s why Audrey Schull, a paralegal, felt so fortunate. The firm where she works lost power but the structure remained mostly damage-free.

“I don’t have power at my house and our car was damaged,” said Schull, a native of Connecticut. “But I have a job. I feel blessed.”

It’s hard to imagine how numerous other small businesses can restart. At Old Mexico restaurant, the building’s air conditioning sat in a tangled mess near the front entrance. As bad as that looked, a Jamaican eatery called Irie Jammin’ Sports Bar and Grill looked considerably worse with the entire front sheared off and laying in the parking lot.

One report issued this week by Womply, a small business software company, suggests  the area may recover faster than expected.

“We expected to see a prolonged trough in sales,” said Dan Lalli of Womply. “Instead, in all three cases we saw a massive dip around the storm’s landfall, followed by a return to normal revenue levels within a week.”