Michael: East Coast May Be Impacted By Hurricane 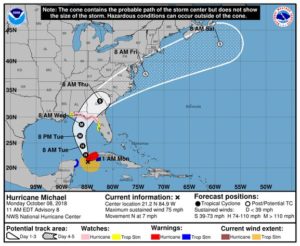 Hurricane Michael is churning toward Florida – but it could have New Jersey and much of the East Coast in its sights, according to patch.com.

Indeed, the National Hurricane Center has placed the southern half of New Jersey in the Hurricane Michael “cone of uncertainty,” saying the strong weather pattern is expected to downgrade to a tropical storm when it arrives in the area by 8 a.m. on Friday (Oct. 12).

Heavy rain and downpours could come earlier, however. The National Weather Service has issued a hazardous weather outlook for all of New Jersey, saying a strong cold front will move through the region late this week, “potentially interacting” with Hurricane Michael.

There is a chance of heavy rain and localized flooding with showers and storms associated with the front, according to the National Weather Service. Indeed, much of the rain is expected to begin falling after 3 p.m. on Wednesday.

The center of storm could come to South Jersey or it could move offshore into the Atlantic Ocean, according to Sarah Johnson of the National Weather Service. Either way, she said, New Jersey is expected to get a lot of rain from this system, especially on Friday.

And even if the storm moves offshore, the northern part of the system is expected to impact New Jersey with heavy rain, Johnson said.

“Right now, there is still a lot of uncertainty about this storm,” she told Patch.