Michael: Florida Town Is Wiped Out, ‘It’s All Gone’ 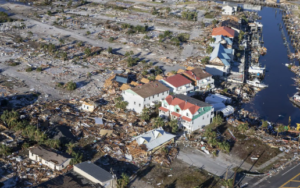 Homes and businesses in Mexico Beach, Fla., were devastated by Hurricane Michael, which hit Wednesday afternoon with winds of up to 155 mph. The storm surge, wind and rain flattened large swaths of the town.

The U.S. National Guard unit raced to clear rubble and power lines as it made its way along U.S. Highway 98. The goal: Blaze a path to this isolated beach town on Florida’s Gulf Coast, the place that bore the most devastating impact of Hurricane Michael’s landfall, so rescues could begin Friday (Oct. 12), according to The Washington Post.

Members of the Army guard unit from nearby Bonifay, Fla., knew all about Mexico Beach — population 1,072 — where in the past they had gone swimming in the surf and waved hello to friends at the Dollar General. But once they emerged onto the spot where the town had been, the devastation was nearly unfathomable.

The public pier had washed away. Entire blocks of houses were wiped clear off their foundations. The town’s landmark El Governor Motel was gutted, its heated pool and Tiki Bar a pile of detritus, colorful beach umbrellas shredded and upended. The popular RV park looked like a junkyard. Beach houses were pulled off their pilings. Toucan’s, a favorite seafood restaurant, lay in ruin.

“It was just gut-wrenching,” said Staff Sgt. Andrew Pliscofsky. It was his fourth hurricane rescue operation, but he had never seen anything like it. “It was like a monster came through and kicked it all down. This all just shocked us.”

Michael hit the beach here Wednesday afternoon as a Category 4 hurricane with 155 mph winds, slamming into the coastline and tearing through several inland communities. Though people knew the storm was coming, many thought it would not be as ferocious as it became.

As the National Guard arrived, Thomas Jett was out surveying the town after he weathered the storm there with this dog. He had waited too long to evacuate and then had to turn back when his van was nearly blown off the road.

“There’s not a word in the dictionary to explain how bad it was,” Jett said. “It’s like the end of the world. . . . It’s amazing anybody’s still alive, still standing. . . . In the blink of an eye it’s all gone. It’s horrible.”