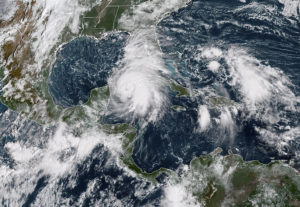 Tropical Storm Michael was upgraded to a Category 1 hurricane on Monday as it barreled toward the Gulf Coast. It could hit Florida as a Category 3 storm.

Hurricane Michael raced toward the Florida Panhandle on Tuesday (Oct. 9), threatening to bring the ferocious rains and winds of a powerful tropical cyclone to the coast and hundreds of miles inland, according to The New York Times.

The storm is expected to make landfall over the Panhandle on Wednesday as a major hurricane, with wind speeds of at least 111 miles per hour. Some counties have issued evacuation orders, and shelters have been opened.

Here are the latest developments:

• As of 8 a.m. Tuesday, the National Hurricane Center said the storm had strengthened to a Category 2 hurricane with maximum sustained winds of 100 miles per hour and was moving north-northwest at 12 m.p.h. in the southeastern Gulf of Mexico.