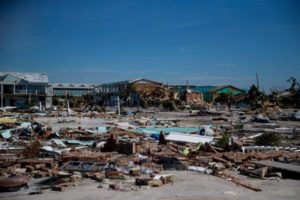 Hurricane Michael left a swath of destruction throughout the Gulf Coast of Florida.

Hurricane Michael is no more, according to The New York Times.

The violent storm that ripped through the southeast, leaving a trail of death and destruction from Florida to Virginia, finally moved off the coast over the Atlantic Ocean overnight on Thursday (Oct. 11). It is now known as Post-Tropical Cyclone Michael.

Michael made landfall in the Florida Panhandle on Wednesday as a Category 4 hurricane — the strongest on record to hit the area — and charged north through Georgia and into the Carolinas and Virginia, wreaking havoc and causing emergencies. In the storm’s wake lay crushed and flooded buildings, shattered lives and at least 11 deaths, a number that officials worry could rise.

The National Hurricane Center on Friday morning posted its final advisory for the storm formerly known as Hurricane Michael, writing that the “post-tropical cyclone” was trundling northeast and heading for the Atlantic.

The storm is still expected to produce storm surge flooding along the North Carolina coast, though that should diminish Friday, along with powerful winds in the mid-Atlantic in the early part of the day. The storm is even expected to drop some rain on New England and could produce up to 5 inches of rain in Nantucket and Martha’s Vineyard, while flash flooding remains possible from the heavy rain left behind in the Carolinas and elsewhere in the mid-Atlantic.

There’s a lot left to fix: Nearly 1.5 million people throughout the southeast woke up without power Friday, including more than a half-million in Virginia — mostly in the Richmond and Hampton Roads areas, according to Dominion Energy. There are about 425,000 outages in North Carolina, according to a Duke Energy spokeswoman.