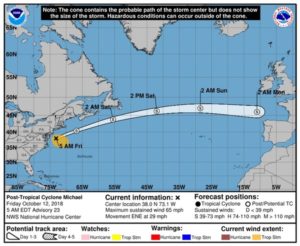 Michael’s expected path as the storm heads out to sea.

It’s time to sign off on Hurricane Michael and finish rewriting the history books, according to AL.com.

The National Hurricane Center on Friday (Oct. 12) morning said Michael had transitioned into a post-tropical storm and issued the last advisory on the system as it moved into the Atlantic and finally away from the U.S.

But that’s nothing like its peak as a Category 4 hurricane with sustained winds of 155 mph and a minimum pressure of 919 millibars (mb) as it made landfall about 12:30 p.m. Wednesday, near Mexico Beach, Fla.

Michael was horribly destructive and deadly as it tore into the Florida Panhandle and left a trail of destruction through the southeast.

It was also a history-making storm.

Michael ranks as No. 3 of the strongest hurricanes to hit the U.S. on record ranked by pressure, according to Colorado State University hurricane expert Philip Klotzbach.

It is also No. 4 on record as ranked by wind speed. Only the Labor Day hurricane of 1935, Hurricane Camille in 1969 and 1992’s Hurricane Andrew rank higher.

It is the first Category 4 hurricane to strike the Panhandle on record, which goes back to 1851.

According to Klotzbach, Michael is also the strongest October hurricane on record to strike the continental U.S., if you rank by lowest central pressure, which was 919 mb at landfall.

According to Klotzbach the previous record had been shared the Georgia Hurricane of 1898 and Hurricane Hazel in 1954, both with 938 mb.