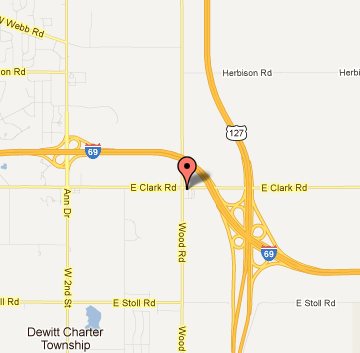 Red pin points to the intersection of Clark and Wood roads north of East Lansing, Mich. where an upscale RV park is proposed. Map courtesy of Google.

A Lansing, Mich., developer is promising to work with area residents on its plan to build a seasonal recreational vehicle resort on a 53-acre tract at Wood and Clark roads in DeWitt Township north of East Lansing.

“We would be a good neighbor there,” Alex Coss, a representative for Bath Township developer Daryl Kesler, told the township board on Jan. 23. “We will work with those folks to help them preserve what they have.”

On a 6-1 vote, the board approved a special use permit for the proposed Woodside Golf Course and RV Park at the southwest corner of Wood and Clark, known as Gunnisonville Corners, with a list of conditions that includes screening of the development from the road.

The project now moves on to the site-plan review process.

The upscale park would have 119 sites and be limited to newer, larger RVs such as motorhomes and fifth-wheel trailers, the company said. It would would be open from March 15 to Nov. 15, with no RVs allowed on the site during the off-season, it said.

The park would cater to golfers, retirees, RV groups and people who want to come to the area because of Michigan State University, said Coss, general manager of the Eagle Eye and Hawk Hollow golf courses.

Work would start this spring, with the opening planned for the spring of 2013, Coss said.

Kesler bought the Kirkside Golf Course just south of the site last year and submitted a proposal to the township in September. Such a development is a permitted use under the area’s agricultural zoning classification, township officials said.

Area residents voiced numerous concerns about the proposal during a public hearing before the Planning Commission in November. Some were worried about possible contamination of their wells from the park’s septic system or the type of clientele the park might attract.

And some said the park wouldn’t fit the historic nature of the area, which includes the Gunnisonville Cemetery and one-room schoolhouse on the southeast corner of the intersection.

The planning commission deferred action until some of those questions were answered. On Jan. 5, the panel recommended the special use be granted with a list of special conditions.

The township board added a condition that the park be 90 percent screened from view along Wood and Clark roads. Company representatives said they will meet that requirement using berms and landscaping. They also vowed to work with residents on erecting a sign denoting the corner’s heritage.

The RV sites will have gravel parking spaces and paved patio areas, Coss said. Amenities might include stocked ponds, a clubhouse, a general store, laundry facilities and sports courts, he said.

Tents, pop-up campers and smaller travel trailers will not be allowed, he said.