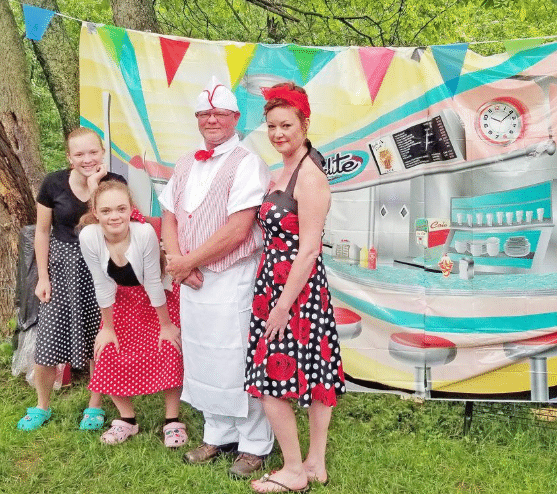 “Because of the weather, we had less than anticipated, but it still involved around 50 people,” organizer Chris Hoffman said.

As campground event coordinators, Hoffman and his wife, Kary, like to get the whole campground involved in their events.

They’ve also done Christmas in July and Halloween-themed events. Last Halloween, Hoffman said 15 campers participated by decorating with pumpkins, lights, ghosts and other decorations. While some had full-out graveyards, or things to scare people, others had pumpkins, like one lady who offered a carving station.

At the Fifties Party on June 15, backdrops were purchased for pictures and participants took part in karaoke and listened to ’50s music throughout the evening. Next year, they may “change it up” and do a Western theme, Hoffman said.

The Hoffmans and their two daughters, Delaney and Emily, have camped at the campground for about five years. They decided to organize events since they had participated in themed parties at other campgrounds where they stayed.

“They weren’t doing parties for the seasonals here, so we decided to bring ideas to this campground,” Hoffman said. “Over the years, it’s been more of a hunter’s campground. What drew us were the boat docks and the people. We’ve gotten to know everybody and we thought it would be fun. Each year, we hope to get more people involved.”